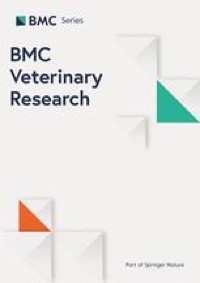 An 11.5-year-old, male neutered European Short Hair Cat, was presented at the emergency service of the Clinic for Small Animals (University of Veterinary Medicine Hannover, Germany) due to behavioral changes (especially aggression), generalized ataxia and sneezing. For approximately 3 months, the cat was sneezing and for seven days prior to presentation treated for otitis externa with amoxicillin/clavulanic acid by the referring veterinary surgeon. The clinical signs deteriorated further. The referring veterinary surgeon performed then a dental restoration with the suspicion of inflamed and painful teeth as the cause for the clinical signs. The cat became more aggressive, showed episodes of ‘running fits’, uncoordinated scratching and generalized ataxia. The cat also started to urinate and defecate outside the cat´s litter box, was falling into the feeding dish, developed difficulties while jumping and finally showed compulsive pacing. Otherwise, the cat was regularly vaccinated and dewormed, kept as an indoor-cat and received a commercial diet.

During the physical and neurological examination, the cat was highly aggressive and defensive but otherwise alert. Pulse (144 beats per min), respiration (36 breaths per min), body temperature (37.9 °C), and other physical findings were considered normal. Because of hiding and avoiding walking, it was not possible to investigate whether ataxia or paresis were present. Otherwise, the neurological examination was unremarkable. Based on the history and the results of the clinical examination a forebrain lesion was suspected. Hematology, biochemistry, electrolytes, and thyroxine levels taken at the referring veterinary surgeon were unremarkable. Based on previous results, MRI was recommended for further diagnostic examination. MRI of the brain was performed with a 3 Tesla MRI unit (Phillips Achieva Medical Systems, Eindhoven, the Netherlands). MRI sequences included: T2-weighted images in transverse (tra) and sagittal (sag) plane, tra FLAIR (Fluid-attenuated inversion recovery), tra GRASE (Gradient and Spin echo), dorsal (dor) SPAIR (Spectral attenuated Inversion Recovery) as well as a tra, sag and dor T1-weighted pre- and post-contrast (Gadoteric acid/Gadoterate meglumine). Previously, the cat was anesthetized and placed in sternal recumbency for image acquisition. General anesthesia was induced with intramuscular dexmedetomidine (5 μg/kg), butorphanol (0.3 mg/kg) and midazolam (0.3 mg/kg) and intravenous alfaxalone dose to effect. After intubation, anesthesia was maintained with isoflurane in air and oxygen.

The MRI revealed a large, focal, extra-axial, lobulated, well demarcated, moderate- to highly heterogeneous mass within the lateral ventricles. This heterogeneous mass lesion was mostly hypointense to surrounding brain parenchyma on T1 as well as T2-weighted images, SPAIR and GRASE. Hyperintensities were mainly found within central parts of the mass and the mass was inhomogeneous, moderate to marked contrast enhancing (Fig. 1). The space occupying, intraventricular mass consisted of two bilateral slightly asymmetric halves within the ventricles and therefore leading to a marked dilation of both lateral ventricles and marked mass effect, including compression of the remaining brain parenchyma, internal hydrocephalus, marked supracollicular cerebrospinal fluid accumulation and moderate to severe cerebellar herniation (Fig. 1). Furthermore, the cavity of the olfactory bulb and the central canal of the spinal cord was dilated (hydromyelia), an alteration of activity of the choroid plexus and therefore cerebrospinal fluid production and physiology was therefore suspected. Based on the previous description of the MRI findings, a cholesterol granuloma with bleedings was considered. The cat was euthanized for animal welfare reasons because of the guarded prognosis and therefore no investigation of the cerebrospinal fluid was performed.

Histologically, an expansive growing mass within the lateral ventricles extending from the choroid plexus was detected. The mass consisted of numerous, partly foamy macrophages with intracytoplasmic brown pigment as well as a deposition of cholesterol, characterized by optically empty, crystal-shaped clefts (“cholesterol clefts”), separated by septae of fibrous connective tissue (Fig. 2). By Prussian blue staining the intrahistiocytic pigment was identified to be hemosiderin, a product of hemoglobin degradation (Fig. 2). The morphological findings including granulomatous inflammation, cholesterol deposition and large quantities of hemosiderin-laden macrophages were consistent with a bilateral cholesterol granuloma of the choroid plexus of the lateral ventricles. The adjacent cerebral parenchyma was compressed and showed a mild to moderate gliosis. Within cerebellum and spinal cord no morphological alterations were detected. Additional histological findings included an oligofocal, moderate, lympho-plasmacytic pancreatitis and a multifocal, mild, non-purulent, chronic, interstitial nephritis.