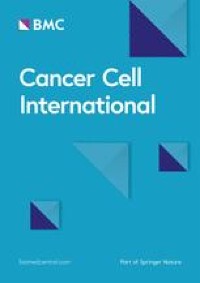 According to the previously described methods [9], cisplatin-resistant cell line Tca-8113-CDDP, was derived from cisplatin-sensitive cell lines Tca-8113 by treating with gradually increasing doses of cisplatin (Sigma, USA) in cell culture medium until the survival cells exhibited a normal growth pattern.

The cisplatin or β-Ele cytotoxicity and the cell viability were detected by MTT (3-(4,5-dimethylthiazol-2-yl)-2,5-diphenyltetrazolium bromide) assay. For detection of cisplatin and β-Ele cytotoxicity, cells were seeded in 96-well plates with a density of 5 × 103 cells/well. Then, Tca-8113 and Tca-8113-CDDP cells were treated with a various concentration of cisplatin (0, 0.5, 1, 2, 4, 8, 16, 32 μg/ml) or β-Ele (Yuanda Pharmaceutical Co. Dalian, China) in gradient concentrations (0, 20, 40, 60, 80, 100 μg/ml). After cultured for 48 h, the cells were incubated with 20 µl MTT (Promega, USA, 5 mg/ml) for 4 h. After MTT removed, 200 μl DMSO was added. The optical density (OD) at 570 nm was determined using microplate reader (Bio-Rad, USA). The cell viability were calculated according to the OD values, as follows: cell viability = (ODdrug − ODblank)/(OD0drug − ODblank). The half-maximal inhibitory concentration (IC50) of cisplatin or β-Ele was determined from the dose-responses curves.

As for the cell proliferation, cells seeded in 96-well plates at 5 × 103 cells/well were cultured for 24 h, 48 h or 72 h, then examined by MTT assay as above. And the proliferation curve was plotted with time point as the X-axis and OD value as the Y-axis.

For cell cycle analysis, the cells were seeded into 6-well plates at 5 × 104 cells/well, and cultured for 24 h at 37 ℃ with 5% CO2. Then the cells were treated with drugs for 48 h, washed with cold PBS for twice and fixed with 70% ethanol for 24 h at 4 ℃. After washed with PBS, the cells were incubated with RNase A (0.1 mg/ml), and stained with propidium iodide (PI, Sigma, USA) for 30 min in the dark according to the manufacturer’s protocol. The cell cycles were analyzed by FACSan flow cytometry (BD Biosciences, USA).

For cell apoptosis analysis, the cells were seeded into 6-well plates at density of 5 × 104 cells/well for 24 h. After treatment with drugs for 48 h, the cells were collected and washed with cold PBS, subsequently stained with Annexin V-APC and 7-AAD according to the protocol of Annexin V-APC/7-AAD Apoptosis Detection Kits (Multi Sciences Biotech, Hangzhou, China). Then the cell apoptosis rates were assessed by FACSan flow cytometry (BD Biosciences, USA).

The total protein was extracted by RIPA buffer (Sigma, USA) with protease inhibitor. The proteins were separated by sodium dodecyl sulfate polyacrylamide gel electrophoresis (SDS-PAGE) and transferred to polyvinylidene fluoride (PVDF) membranes. After blocked in 5% nonfat milk for 1 h, the membranes were incubated with appropriate concentration of primary antibodies, including cleaved caspase-3, Bax, Bcl-2, STAT3, p-STAT3Y705, JAK2, phospahorlated (p)-JAK2Y1007/1008, GAPDH (Abcam, UK) overnight at 4 ℃. Then the horseradish peroxidase (HRP)-conjugated secondary antibody were incubated at room temperature for 2 h. The protein bands were detected by enhanced chemiluminescence according to the manufacturer’s instructions and analyzed using Image-Pro Plus software (National Institutes of Health, USA) with β-actin as internal reference.

Forty BALB/c nude mice (4–6 weeks) were purchased from SLAC Experimental Animal Center (Shanghai, China) and housed under specific pathogen free conditions with a 12 h dark/light cycle at (25 ± 2) ℃. Tca-8113-CDDP cells (5 × 106) were subcutaneously injected into the right axilla of mice. Then the mice were randomly divided into four groups (10 mice in each group): control group, β-Ele group, CDDP group, β-Ele+CDDP group, and received intraperitoneal administration of PBS, β-Ele (45 mg/kg), and/or cisplatin (4 mg/kg) every three days (all drug were added PBS and make to 0.1 ml), respectively, from the average tumor size reached 0.1 cm3. The dose was according to the reported dosage application [10, 11]. The width and length of tumors were measured once every three days with a caliper, to calculate the tumor size [Volume (mm3) = width2 × length/2]. The mice were sacrificed by intraperitoneal injection of pentobarbital sodium (50 mg/kg) at day 27 after tumor cell inoculation. The xenograft tumors were obtained and weighted. Half of the tissues were fixed in 10% formalin and embedded in paraffin, serial Sections. (5 μm), the other tissues were stored in liquid nitrogen. All animal experiments were approved by the Animal Research Committee of the First Affiliated Hospital of Zhengzhou University.

The tumor tissue sections were taken for immunohistochemistry to determine the expression of p-JAK2 and p-STAT3. After dewaxing and hydration, the antigens were retrieved and endogenous peroxidase was blocked by 3% H2O2 for 20 min. After blocking with 5% BSA, the sections were incubated with primary antibodies: p-JAK2, p-STAT3 (Abcam, UK) overnight at 4 ℃. Then the secondary antibodies were incubated for 1 h at 37 ℃. DAB substrate was used and the sections were counterstained by hematoxylin. The positive expression of brown-yellow granules were observed under a inverted microscope (Olympus Corporation, 200× , 400×). Immunohistochemistry in tissues was quantified using Image ProPlus v.7.0. H-score was based on the staining intensity and percentages of stained cell. Four score categories in immunostaining intensity: negative (0), weak (1), moderate (2), and strongly (3). H-score (range of 0–300) was calculated as follow: H-score = [(1 × % weakly stained cell) + (2 × %moderately stained cells)+(3 × % strongly stained cells)] [12]. Five visual field were randomly selected to calculate the averaged H-score for each section.

All the data were analyzed by SPSS21.0 (SPSS Inc., Chicago, USA) and graphs were drawn with GraphPad Prism Version 6.1 (GraphPad Software, Inc., USA). The data were presented as ((overline{x} pm s)). Student’s t test was used to analyze the significance of difference between the two group. P < 0.05 were considered significance.

By Haiye Wang and Yingyi Ma