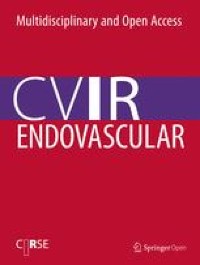 Although rare, there have been cases similar to ours that have been reported. The initial modality of imaging is doppler ultrasound where there is enlargement of the hepatic artery and dilatation of the segment of the portal vein where the fistula is located (Mora et al. 1992). Pulsatile hepatofugal flow in the portal vein and color speckling in the hepatic parenchyma adjacent to the fistula may also be seen (Mallant et al. 2007).

The endpoint for treatment is restoration of normal flow dynamics in the hepatic artery and portal venous system. Treatment options are often multi-staged including embolization of the feeding artery especially if a single one is identified with possible subsequent surgery involving hepatic artery ligation/resection of lesion especially if new feeders open as a result of embolization (Akpek et al. 2001). For those patients who are unable to control symptoms, liver transplantation can be considered if available in the healthcare setting. Previously, hepatic artery ligation was considered the sole intervention, but now interventional radiology has the advantage of offering minimally invasive technique which further translates to reduced mortality and morbidity with shorter in patient stay and fewer complications. The downside of the interventional-guided embolization is that it can be limited by variant anatomy, tortuosity of vessels and elongation of the vessels die to a high dynamic flow (Oguslu et al. 2019). The access can be transfemoral and in cases where this fails, a transhepatic approach can be attempted. The latter is often fraught with more complications including peritoneal hemorrhage, fistulization, pneumothorax (Oguslu et al. 2019).

The choice of embolization agent depends on the type of arterioportal malformation, size and number of the feeding arteries, location of the fistula which further determines the accessibility (Oguslu et al. 2019). One of the main factors especially in developing countries, is availability as in our case where we used the metallic coils which is the most commonly used agent. Other options include Amplatzer plug, N-butyl cyanoacrylate, polyvinyl alcohol (PVA) or microsphere (Tasar et al. 2005). The Amplatzer plug is also popular as it can be used solely for occlusion of large vessels (Oguslu et al. 2019). PVA particles in general are not the preferred embolic agent as there is a large risk of non-target embolization into the venous system in high flow malformations. One study has reported successful embolization of larger arteriorportal malformations with detachable balloons which may be used either alone or in combination with other embolization agents (Tasar et al. 2005).

One of the complications to consider include migration of the embolization agent past the site of the arterioportal malformation and into a distal tributary of the portal vein which may cause portal venous thrombosis and subsequent infarction. The risk for migration of embolization increases with increasing size of the arterioportal malformation and high flow rates (Oguslu et al. 2019).