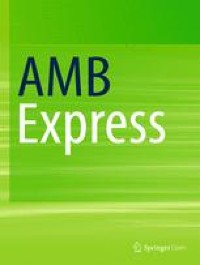 The efficiency of the formation of G. zeae protoplasts was largely affected by the composition of the nutrient medium used for cultivating the mycelium of the second generation stage, which was higher when glucose and yeast extract were used as components of the medium. On the contrary, the application of peptone and soy flour led to a significant decrease in the yield of protoplasts (Table 1). This can be explained by possible alterations in the composition of the cell wall, which consists mainly of glucans, chitin, and glycoproteins and, as is well known, changes depending on the growth conditions (Wu and Chou 2019; Garcia-Rubio et al. 2020).

Mycelium age is regarded as one of the main factors influencing the release of protoplasts (Coelho et al. 2010; Wei et al. 2010). The structure of the fungal cell wall is highly dynamic, and may vary during the cell division, growth of fungi and hyphal branching (Li et al. 2017). In the case of G. zeae, the use of log growth phase mycelium ensured the maximum yield of protoplasts (Figs. 2a, 3a-c). This correlates with the literature data, which in most cases demonstrate better protoplast generation from actively growing mycelium (Harling et al. 1988). The age of mycelium was shown to be an important factor while protoplast obtaining from F. graminearum Fg99: mycelia in different times after culturing (6, 8, 12 and 14) were examined for protoplast preparation and the best result was obtained when the spores were left to germinate for 6 h (Moradi et al. 2013).

A sharp (more than fivefold) decrease in the yield of G. zeae protoplasts when using 48-h mycelium (Fig. 2a) may be associated with increased differentiation of the population, a change in the frequency of septation of hyphae, and the appearance of spore cells with a denser cell wall (Ren et al. 2018). As shown earlier, C. lunatus protoplasts obtained from actively growing mycelium were presumably more resistant to external influences compared to protoplasts obtained from cells of older fungi (Długoński et al. 1998).

The use of 1 M NH4Cl contributed to the best integrity of G. zeae protoplasts (Figs. 2b, 3h). The results differ from those reported for the fungal strains of Pseudozyma flocculosa, Epulorhiza repens, Ceratorhiza sp. and Benjaminiella poitrasii, in which higher protoplast integrity was achieved using 0.6 M KCl as an osmoprotector (Coelho et al. 2010; Cheng and Bélanger 2000; Chitnis and Deshpande 2002). The properties and composition of cell walls differ in different fungal species and may vary depending on environmental conditions, which, in turn, necessitates experimental selection of the osmotic stabilizers used and their concentrations, as well as lytic agents and lysis conditions for protoplast generation (Patil and Jadhav 2015; Gow et al. 2017; Li et al. 2017; Peng et al. 2016). Previously when protoplast obtaining from G. zeae 5373 and ATCC 20,273 strains, the most effective combinations of lytic enzymes were chitinase plus β-glucuronidase yielding up to 1 × 105/mL protoplasts (Adams et al. 1987; Adams and Hart 1989).

It is known that when obtaining fungal protoplasts, the formation of spheroplasts (cells with partial cell wall) may be observed and it often depends on the choice of lytic enzymes and duration time (Li et al. 2017; Wang et al. 1988). In turn, the presence of spheroplasts can increase the percentage of their regeneration (Wagner and Wilkinson 1993; Cabo et al. 1986). Our goal was to obtain true intact protoplasts of G. zeae for their further mutagenesis, and for this purpose a lysing enzymes complex from T. harzianum contains β-glucanase, cellulase, protease, and chitinase activities necessary for complete removal of cell wall was chosen. This, probably, contributed to the production of mainly protoplasts than spheroplasts in the case of G. zeae that, in turn, could affect a relatively low degree of their regeneration frequency (1.5–9%) (Fig. 5).

The concentration of the T. harzianum lytic enzyme cocktail chosen in this work and the digestion time strongly influenced the release of G. zeae protoplasts. Application of 7.5 mg/mL for 5 h (Figs. 2c, d) ensured best result, whilst the exposure for more than 10 h led to 2.5–10 times lower protoplast release (Fig. 2d). Probably, the protease, which is a part of the digestive complex, contributed to destruction of G. zeae protoplasts causing extensive damage of their membrane proteins. As reported earlier, the protoplasts of various fungi were destroyed by proteinases upon the contact for more than 4 h (Kitamoto et al. 1988). Prolonged incubation with digestive mixtures resulted in lysis of the protoplasts of E. repens, Ceratorhiza sp. and Geomyces sp. (Coelho et al. 2010; Ren et al. 2018).

Protoplast regeneration is a cell-wall reconstruction and return to mycelial growth. Usually, the protoplasts of filamentous fungi are characterized by a low frequency of regeneration, ranging from 0.1 to 50.0% for different fungi, depending mainly on the fungal species and the composition of the regeneration medium (Li et al. 2017; Balasubramanian et al. 2003). Tests for fungal growth at different concentrations of osmotic stabilizers are needed because, in some cases, changing the concentration of ingredients in the regeneration media can significantly increase the frequency of protoplast regeneration (Coelho et al. 2010).

The highest regeneration frequency of G. zeae protoplasts (≥ 9%) was observed while using 1 M sucrose in the agar medium (Fig. 4). The positive effect of sucrose on protoplast regeneration was previously shown for E. repens, Ceratorhiza sp. and Moniliophthora perniciosa (previously Crinipellis perniciosa) fungal strains: the use of 0.5 M sucrose provided the best regeneration rate ranging from 5 to 10% (Coelho et al. 2010; Lima et al. 2003). 0.8 M sucrose was successfully used for regeneration of G. zeae 5373 and ATCC 20,273 protoplasts however if 0.8 M mannitol was used to suspend the protoplasts instead of 0.8 M sucrose, then the number of regenerated protoplasts decreased by approximately 20% (Adams et al. 1987; Adams and Hart 1989). For P. flocculosa the regeneration frequency of protoplasts reached 75% when 0.8 M sucrose was used as an osmotic stabilizer in agar medium (Cheng and Bélanger 2000). The protoplast yields of fungus Antrodia cinnamomea in the reaction mix with MgSO4 and KCl as osmotic stabilizers gradually decreased after 4-h digestion; on the other hand, sucrose (0.8 M) maintained a stable protoplast yield throughout the 9-h digestion (Garcia-Rubio et al. 2020).

Fungal protoplast mutation is known to be a fast and convenient method providing high sensitivity to stimulation, high mutation rate, and simplicity of the screening procedure (Peng et al. 2016). The use of N-methyl-N’-nitro-N-nitrosoguanidine (NTG) or UV light irradiation are the most common methods of fungal protoplast mutagenesis (Wilmańska et al. 1992; Shafique et al. 2009; Besoain et al. 2007). Successful use of UV irradiation was previously observed when obtaining various G. zeae ‘Dewar’, 65-338B, 251-15 and ATCC 20273 mutants including adenine-, arginine-, and histidine auxotrophs; a non-nutritional, heat-sensitive mutant; and an NADPH-dependent, glutamate dehydrogenase-deficient mutant (Leslie 1983).

In the present study, the optimum of UV exposure (3.5 min) as well as the MIC of ketoconazole (70 µM) hindering G. zeae protoplast regeneration have been defined (Figs. 5i, 6a). The imidazole antifungal agent is well known as an effective inhibitor of cytochrome P450 enzymes and previously it was used as a selective marker while screening of mutant strains of C. lunatus with increased steroid hydroxylase activity (Oh et al. 1993; Lu et al. 2007; Kollerov et al. 2010).

By combining the developed original procedure of G. zeae protoplast obtaining, UV mutagenesis and regeneration, 27 ketoconazole-resistant mutant clones were obtained. Comparative statistical analysis of LCA to UDCA conversion by G. zeae parent and mutant strains based on GC data of three independent experiments revealed three mutant strains (M-13, M-20 and M-23) capable of producing 10–30% more UDCA. One of the strains (M18) showed weaker than parent strain activity towards LCA (Fig. 8a). Other selected mutant strains did not differ from the parent fungus on their activity towards LCA (Fig. 8a). Among the tested strains, the mutant G. zeae M23 was chosen due to its superior target activity. The strain selectively converted LCA even at 4 g/L to give up to 88% of UDCA (Fig. 8c).

Up to date, the use of fungal protoplasts in the producing mutant strains with increased steroid hydroxylase activity was reported only for C. lunatus strains that are known mainly for their 11β-hydroxylase activity and applied in the synthesis of hydrocortisone. Using this approach, a mutant C. lunata KA91 had been obtained that demonstrated 42% higher production of 11β-hydroxylated products compared to parent strain (Lu et al. 2007). The selectivity of cortexolone to hydrocortisone conversion was increased when using mutant clones of C. lunata IM2901 (Wilmańska et al. 1992). In comparison with parent strain, C. lunata M4 mutant strain showed 25–30% higher yield of 11β-hydroxylated derivatives from 17α,21-diacetate cortexolone (Kollerov et al. 2010).

To our knowledge, no data on the improvement of steroid 7β-hydroxylase activity of the fungal strains via protoplast obtaining and mutagenesis have been reported so far. It should be noted that the absolute value of UDCA titer (3.52 g/L) reached using G. zeae M23 mutant strain obtained in this work significantly exceeds LCA to UDCA conversion rates ever reported for fungal strains, including Fusarium equiseti M-41 (a maximum UDCA yield of 0.35 g/L) (Sawada et al. 1982, 1986), Penicillium sp. TTUR 422 (FERM BP-5410) (maximum 0.25 g/L of UDCA) (Okamura and Matsui 1999) and the representatives of Bipolaris, Cunninghamella, Cochliobolus and Gibberella genera where UDCA yield did not exceed 0.9 g/L (Kollerov et al. 2013).

The results evidence that the method based on protoplast generation, UV mutagenesis and selection of ketoconazole-resistant mutant clones allows improvement of steroid hydroxylase activity of filamentous fungi and open up the prospects for effective microbial manufacturing of the value-added UDCA.

With high probability, we expect that 7β-hydroxylase from G. zeae relates to CYP monooxygenases. Despite the publications on the complete genome sequences of related strains of G. zeae and F. graminearum (Jurgenson et al. 2002; King et al. 2015), the 7β-hydroxylase gene has not yet been identified. To fill this gap, our next work will focus on the identification of the gene encoding steroid 7β-hydroxylase in G. zeae VKM F-2600 using transcriptomic analysis, cloning and heterologous expression, followed by a comparative analysis of the parental and mutant strain M23 for the presence of mutations in the sequences of the selected gene that may contribute to its overexpression.