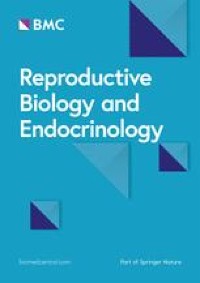 FF samples containing hGCs retrieved from women undergoing ovarian stimulation for ART were harvested with their agreement at Unidade de Medicina da Reprodução Dra. Ingeborg Chaves-Centro Hospitalar de Vila Nova de Gaia/Espinho, from January 2021 to April 2022. A group of 32 patients was enrolled in this study, with a mean of 32 years of age and 21.5 kg/m2 of body mass index (BMI). Inclusion criteria were women presenting male factor associated to infertility. Women with endometriosis, polycystic ovary syndrome (PCOS), tubal factor, and idiopathic factor, as well as women with infertility associated to hormonal factors, were excluded. Data regarding the oocyte number, maturity, fertilization rate, and clinical pregnancy were collected. All procedures were conducted in accordance with the Declaration of Helsinki, endorsed by the local ethics committee and approved by Comissão de Proteção de Dados (Proc. no. 764/2017).

Ovarian stimulation was triggered with different dosages of gonadotropins, follicle stimulating hormone (FSH) and/or LH, for multifollicular development. Then, the final stimulus was performed by a single administration of human chorionic gonadotropin (hCG) or gonadotropin-releasing hormone (GnRH) agonist 36 h before the oocyte retrieval. For ART performance, the FF consisting of oocyte and hGCs was aspirated and the oocyte was isolated for further fertilization. The remaining FF was transferred to 100 mL polypropylene tubes and stored at 37ºC for a maximum of 2 h until sample processing. hGCs were isolated and cultured independently according to the protocol previously published by Moreira-Pinto et al. [15], with some modifications. Briefly, FF samples were centrifuged at 350 g at 10 °C for 10 min. The cell pellet was collected and slowly added to a Percoll:PBS (1:1) density gradient. The samples were then centrifuged at 900 g at 10 °C for 20 min. hGCs present at the interface of Percoll:PBS and FF gradient were collected into a new tube, in which DMEM/F12 10% FBS was added and centrifuged at 350 g at 10 °C for 5 min to wash cells. The supernatant was discarded and the hGCs were resuspended in DMEM/F12 10% FBS.

hGCs and COV434 cells were seeded at densities of 7.5 × 104 and 5.0 × 104 cells/well, respectively, in a transparent 96-well plate. After 24 h, the medium was removed, CMs obtained from culture of M0, M1 and M2 macrophages were added to a final volume of 200 μL, and incubated for 72 h at 37 °C with 5% CO2 atmosphere. MTT assay conditions were adapted from the work by Castelôa et al. [19]. Briefly, at the end of incubation time, an MTT solution was added (0.5 mg/mL) and the plate was incubated for another 3 h at 37ºC with 5% CO2 atmosphere. After incubation, the medium was removed and a solution of DMSO/isopropanol (3:1) was added to dissolve the purple MTT formazan crystals. The plate was gently shaken at 70 rpm for 15 min to dissolve the crystals, which were quantified spectrophotometrically at 540 nm using a microplate reader (BioTek Synergy HTX Multi-Mode).

After 72 h of interaction between CMs obtained from culture of M0, M1 and M2 macrophages, morphological abnormalities in hGCs and COV434 cells were evaluated by Giemsa stain [19]. hGCs and COV434 cells were seeded in a 24-well plate with round coverslips at densities of 7.0 × 105 and 3.5 × 105 cells/well, respectively. After adherence, 500 μL of CMs of M0, M1 and M2 were added to the cells and incubated for 72 h at 37 °C with 5% CO2 atmosphere. After incubation, the CMs were removed, cells were washed twice with PBS, and fixed with cool methanol for 10 min at room temperature (RT). Then, the methanol was removed, cells were washed again twice with PBS, Giemsa solution in H20 (1:10) was added, and the cells were incubated for a further 30 min. After incubation, the cells were washed several times with tap water and the coverslips were removed, dried, and mounted with DPX medium. Cells were observed under the Eclipse CI microscope (Nikon, Japan).

For macrophages derived from THP-1 differentiation (n = 3, in triplicate) and hGCs and COV434 cells experiments (n = 3, in duplicate), cells were lysed with TripleXtractor reagent (#GB23.0050; GRiSP Research Solution, Porto, Portugal) to isolate total RNA according to the manufacturer’s protocol. The concentration and purity of the isolated RNA were measured using a NanoDrop ND-1000 Spectrophotometer (NanoDrop Technologies, Inc., Wilmington, DE, USA) and samples were stored at -20ºC prior to cDNA synthesis. The isolated RNA was converted to cDNA using the Xpert cDNA Synthesis Mastermix (#GK81.0100; GRiSP Research Solution, Porto, Portugal) according to the manufacturer’s protocol. Samples were diluted in H2O treated with diethyl pyrocarbonate to a final volume of 40 μL and then stored at -20ºC or immediately used as a template in RT-PCR. The cDNA was amplified with specific primers (Table 1), using Xpert Fast SYBR Mastermix (#GE20.2501; GRiSP Research Solution, Porto, Portugal) in Bio-Rad Real-Time PCR Detection System (Bio-Rad Laboratories, USA), according to the manufacturer’s protocol. RT-PCR conditions were, in all cases, initiated with a denaturation step at 95 °C for 3 min, followed by up to 40 cycles of denaturation, annealing, and primer extension. The fold change in gene expression was calculated using the 2−ΔΔCt method and normalized with the housekeeping gene glyceraldehydes 3-phosphate dehydrogenase (GAPDH).

For hGCs and COV434 cells experiments (n = 3 for each target), CMs obtained from culture of M0, M1 and M2 macrophages were removed, cells were washed twice with PBS, lysed with lysis buffer (Tris–HCl 20 mM, NaCl 100 mM, EDTA 1 mM, and Triton X-100 1%) containing a protease inhibitor cocktail (#P8340; Sigma–Aldrich Co., St. Louis, MO, USA), and incubated on ice for 30 min. After incubation, cell extracts were harvested, frozen/thawed three times and centrifuged at 14000 g at 4ºC for 10 min. The supernatant was collected and the protein concentration was quantified by Bradford assay. Samples (5–40 μg) were subjected to 10% SDS–PAGE and proteins were transferred to nitrocellulose membranes in a turbo transfer system (Trans-Blot®, Bio-Rad). After blocking in 5% non-fat milk for 1 h at RT, the membranes were incubated with the primary antibodies, COX-2 (#sc-23984, Santa Cruz Biotechnology), ALOX5 (#MA5-26,829, ThermoFisher Scientific), and ALOX12 (#MA5-26,911, ThermoFisher Scientific) diluted at 1:500, and 15-LOX (#sc-133085, Santa Cruz Biotechnology) diluted at 1:250. After incubation, primary antibodies were removed, membranes washed with PBS-Triton, and incubated with the secondary antibodies, peroxidise-linked anti-goat (#sc-2354, Santa Cruz Biotechnology) and anti-mouse (#sc-516102, Santa Cruz Biotechnology) both diluted at 1:2500 for 1 h at RT. Then, secondary antibodies were removed, membranes were washed again with PBS and PBS-Triton, and exposed to the chemiluminescent substrate. Immunoreactive bands were visualized by the ChemiDocTM Touch Imaging System (BioRad, Laboratories Melville, NY, USA). Membranes were then stripped and incubated with β-Actin (sc-47778, Santa Cruz Biotechnology) diluted at 1:500 to control loading variation.