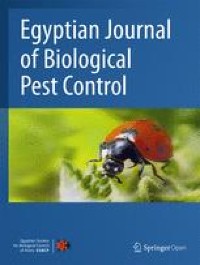 Collection and identification of E. scitula

Predatory larvae of E. scitula feeding on colonies of C. cirripediformis infesting C. diurnum (Fig. 1) were collected from the CSIR-CIMAP Research Farm, Lucknow, Uttar Pradesh, India (26°53′38″ N; 80°58′50″ E, elevation:120 MSL) during June 2021. Five barnacle scale infested shoots (25 cm long) of C. diurnum were collected from 20 plants and placed in bags individually, brought to the laboratory and placed in the insect-rearing cages (30 × 30 × 30 cm3) and kept under the laboratory under controlled conditions (25 ± 5 °C; 65 ± 5% RH and 12L:12D photoperiod) for further observations. After adult eclosion, the adult moths were dissected and the predator was identified based on male genitalia at the National Pusa Collection, Division of Entomology, ICAR-Indian Agricultural Research Institute (IARI), New Delhi), and the identity was also confirmed using sequences of COI gene of mitochondrial DNA.

Experiment was conducted to observe the occurrence of predatory larvae of E. scitula on C. cirripediformis from June to September 2021. Field abundance of E. scitula was enumerated by investigating 15 plants of C. diurnum naturally infested with C. cirripediformis. Two infested shoots (25 cm in length) from each plant were observed for the occurrence of predatory larvae feeding in colonies of C. cirripediformis (Dean and Meyerdirk 1982) and recorded the number of larvae at 10-day intervals. The count of shield-like scale structures on the infested shoots was used to calculate the total larval population of E. scitula. No insecticides were applied to the plants during the study period.