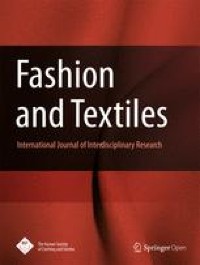 Costume styles can be analyzed according to the type of costume, as shown in Fig. 2

The ancient costume includes Garment A, Garment G, Garment H and Garment L. They are all X-shaped, and each costume can be divided into a top and a skirt. The upper garment has long sleeves, which are directly attached to the bodice, with water sleeves at the cuffs; a belt and jade pendant are worn at the waist, etc.; the skirts can be divided into pleated skirts and horse-face skirts, which are as long as the feet.

Yue Opera “Zhezi” includes garment C, garment D and garment F. The shapes are H-shaped and A-shaped. The sleeves are attached to the bodice, the collar is slanted, some “Zhezi” have “Kendai” shape under the armpits, the “Zhezi” are long and the bodice has slits on both sides.

Garment B is Yue Opera “Pei”, Its shape is A-shaped, with a centre front placket, a “Kendai” shape under the armpits, water sleeves attached to the cuffs, and slits at the sides of the garment.

Garment E is a modified embroidered robe. The shape is A-shaped, with a round collar, smaller sleeves, sleeves attached to the body piece, with a “Kendai” shape at the junction of the body piece and the sleeves. The robe is slit on both sides and has a hem.

Garment I is a female embroidered robe. The shape is H-shaped, with a cheongsam collar cloud shoulders, with FROG and tassels, the gown has a round collar and small sleeve width, with a “Kendai” shape at the joints, the gown is short and knee-length, and the underskirt is a pleated skirt.

Garment J is a coat skirt. The coat is H-shaped and the skirt is A-shaped. The jacket has a round neckline with a “Kendai” under the armpit and the skirt is pleated. The jacket is generally straight, but to reflect the characteristics of the female “Sheng” character, the straight coat was changed to a coat skirt with a sloping spread, adding to the beauty of the costume.

Garment K is the archery suit. It is A-shaped, with cloud shoulders, a round collar and horse-hoof sleeves. There are slits at the front and back to the waist and slits at the sides of the garment.

Costume colors are visual, giving a strong visual impact and appeal, and can most obviously express the psychological activities of the characters, thus most directly conveying information to the audience and mobilizing their emotions.

Apart from style and color, Yue Opera costume patterns are another important element of costume. There are many patterns in the costumes of Yue Opera, which not only play the role of decoration, but also symbolize identity and status.

The 12 selected Yue Opera costume patterns are shown in Fig. 4. Classified according to costume style, the ancient costume was mostly decorated with floral patterns, floral and grass patterns, and scroll design reflecting elegance and dignity. The Yue Opera “Pei”, embroidered with posy design, auspicious animal patterns and has a hem embroidered with floral patterns, which symbolizes a noble status. The “Zhezi” worn by the “Wu Sheng” characters are generally embroidered with birds and beasts and posy design, and the “Zhezi” worn by the “Sheng” characters have floral and scroll design, among which the “Four Gentlemen” pattern symbolizes noble and unsullied character. For the male embroidered robe, there are generally patterns such as the round dragon, sit dragon, sea and mountain pattern and cloud pattern to show the majesty and power of the wearer; for the female embroidered robe, the patterns are mainly peony pattern, phoenix pattern, sea and mountain pattern, cloud crane pattern and fret pattern, which are gorgeous and rich; for the modified embroidered robe, the patterns are more simple, with patterns such as fret pattern and grass dragon pattern. If the role is related to religion, there is a lotus flower pattern and other religiously colored motifs. The archery suit is usually embroidered with posy design, floral and grass pattern, etc.

After the Yue Opera went through reforms, the costumes no longer used the more reflective soft satin, but fabrics of different textures, such as georgette, silk, crepe, etc.

The establishment of the virtual mannequin data is the basis for costume restoration. As the actors in Yue Opera are generally girls, the mannequin data can be divided into 160 cm and 165 cm as the height data for the “Dan” and “Sheng” characters respectively. Then the Fuyi CAD software is used to draw the garment construction diagram, and the garment pattern is imported into the CLO 3D virtual simulation software through DXF format to fine-tune the garment pattern. The CLO 3D interface can present 2D and 3D versions, allowing you to observe the changes in the 3D interface during the sample adjustment process, making the overall effect very convenient. After adjusting the pattern, the garment was tried on virtually: firstly, arrange the position of the sample; secondly, virtual sewing the clothing pieces in order from inside to outside, and finally carry out the virtual fitting and adjustment of clothing. After the virtual fitting of clothing is completed, the fabric, texture and color of the garment is set after checking that all parts of the garment have achieved a high degree of reproduction. Then fill in the clothing pattern in the virtual simulation software, and finally display the restored clothing, as shown in Fig. 5.

In the pre-design phase, we need to find the source of inspiration for the design. In this paper, we have designed two series of costumes. The designed clothing draws on all the elements of these twelve types of clothing. Using various styles of clothing elements for modern fashion, the designs reflect the results of diversified design. Design 1: The first series of clothes were inspired by the ancient costumes worn by Dan characters and the Zhezi worn by Sheng characters. The clothes are X-shaped and H-shaped, and the patterns are simple botanical patterns and the colors are quietly elegant. Design 2: The second series of clothes were inspired by ancient costumes, Zhezi, archery suit and Pei. The shape of the clothes is A and H, and the pattern includes botanical patterns, auspicious patterns and slightly more complex group patterns, and the colors extracted are simple and elegant.

The colors of the two series of costumes have been chosen for their simplicity and elegance, in line with the style and culture of Yue Opera. At the same time, the patterns of the costumes are taken from the traditional costumes of Yue Opera, and the placement of the patterns conforms to the arrangement of the traditional costume patterns of Yue Opera, for example, the layout of the side patterns and the layout of the bottom patterns. The style structure of the costumes is also adopted from traditional Yue Opera costumes, such as the cheongsam collar of the female embroidered robe, the pleated sloping collar worn by the Sheng characters, the water sleeves, the lapels of the ‘Pei’, and the clouded shoulders of the archery suit.

At this stage, the paper is based on the selected patterns, colors and styles for the design of modern fashion. The colors have been extracted from pantone app and CorelDRAW has been used to draw the clothing style designs and to fill in the colors and apply the patterns. Each designed garment in this paper has been exhibited by the table below, including its inspiration. As shown in Fig. 6.