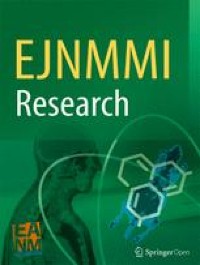 Four healthy subjects (see Table 1) were recruited for the study. All participants were free from internal, neurological or psychiatric disorders assessed via a thorough medical history, physical examination, electrocardiogram and routine laboratory parameters. Exclusion criteria included neurological diseases or psychiatric disorders, illness 2 weeks prior to recruitment, history of drug or atopic allergy, myocardial infarction, history of cancer, liver or renal disease, family history of prolonged QT-interval, MR or PET contraindications, consumption of tobacco products 3 months before recruitment, history of drug or alcohol abuse, significant prior radiation exposure in the past 10 years and for females breast feeding or pregnancy. Female subjects underwent a urinary pregnancy test at the screening visit and on the measurement day. For safety reasons, vital signs of subjects were measured before and after the PET examination. Participants were observed for 3 h after the end of the scanning procedure to monitor potential adverse events.

All subjects gave written informed consent after explanation of the study protocol. The study was approved by the Ethics Committee of the Medical University of Vienna (ethics number: 1980/2018) and registered on https://www.basg.gv.at (EudraCT: 2018-002933-39). Procedures were carried out in accordance with the Declaration of Helsinki. Subjects were insured and reimbursed for participation.

Syntheses were performed as previously described [6, 7]. In short, (R)-[11C]Me-NB1 was produced on a fully-automated GE Tracerlab™ FX2 C synthesis module by a methylation reaction. [11C]CH3I was reacted with the enantiomerically pure des-methyl GMP-grade precursor (R)-NB1 in DMF and in the presence of Cs2CO3 and separated from radiochemical impurities via semi-prep HPLC. The final product was purified using solid phase extraction, eluted with 1.5 mL ethanol and formulated for human application using 10 mL of NaCl (0.9%) and 6 mL of phosphate-buffered saline.

Molar activity was 679 ± 207 GBq/µmol at end of syntheses and 328 ± 112 GBq/µmol at the time of application with the limit of molar activity above > 25 GBq/µmol. The limits of (R)-Me-NB1 and precursor NB-1 concentration were both set below < 0.01 mg/mL. Mean injected dose of the active pharmaceutical ingredient (API) (R)-Me-NB1 was 1.6 ± 0.7 ng/kg body weight (female 2.1 ng/kg, male 1.2 ng/kg), while the mean injected dose of tracer was 305 ± 28 MBq. Therefore, the applied concentration was far below the application limits and subsequently, no pharmacokinetic effects are expected or were observed.

All participants underwent one whole-body PET measurement from head to mid-thighs on a fully-integrated PET/MR scanner (Siemens mMR Biograph, Erlangen, Germany). PET data were acquired in nine passes of increasing duration (0.5, 0.5, 0.5, 1, 1, 2, 3, 4 and 7 min per bed position) in six bed positions, yielding a measurement time of more than 2 h. The radioligand (R)-[11C]Me-NB1 was administered as short bolus via a cubital vein (mean injected dose: 305 ± 28 MBq; 4.4 ± 1.1 MBq/kg body weight). Subsequently, the cannula was flushed with saline. Subjects were instructed not to fall asleep and to let their thoughts wander.

During all nine passes, a two-point DIXON sequence (DIXON, TE/TR = 2.46/3.6 ms, flip angle = 10°, voxel size = 2.6 × 2.6 × 3.1 mm3) was conducted during breath hold after exhalation in each bed position yielding nine whole body DIXON attenuation correction (AC) maps [8]. Due to the short frame durations, no breathing commands were given during the first five cycles. The AC maps were segmented into bone, lung, soft and fatty tissue and air.

The 3D list-mode PET data were reconstructed with an ordinary Poisson-ordered subset expectation maximization algorithm (OP-OSEM, 3 iterations, 21 subsets). Data were corrected for attenuation, scatter, randoms and dead time. AC of the first five passes was performed with the DIXON AC map of the sixth pass due to omitted breathing commands for the first passes. Passes six to nine were corrected with the corresponding AC map. Decay correction was performed for calculation of standardized uptake values (SUV) only. SUV was defined as

Regions of interest (ROIs) were manually drawn on the PET images for brain, thyroid, lungs, heart wall, liver, spleen, kidneys, stomach (fundus), pancreas, bone marrow (substituted by the vertebrae L4 and L5 [9]) and urinary bladder contents using PMOD 4.2 (PMOD Technologies LLC, Zurich, Switzerland). The bladder was delineated with respect to the volume change over the measurement time. PET visualization thresholds were set individually for each subject. The threshold was set as low as possible to visualize the organs, while ROIs were drawn to cover most of the organs, but also to leave enough space to the borders and other organs to omit partial volume and breathing artifacts. The localization of each ROI was crosschecked with the matching MR image.

To estimate the effective dose coefficient, time activity curves (TACs) were extracted for all mentioned ROIs using PMOD. The cumulative activity (kBq × h) was defined as the non-decay corrected area under the curve (AUC; kBq/mL × h), utilizing a trapezoid method, multiplied by the respective mass of the organ (mo; male or female) of the OLINDA/EXM International Commission on Radiation Protection 89 (ICRP89) phantom. As the previous integration using the trapezoid function covers more than five physical half-lives of the carbon-11, the AUC from the last time point to infinity (AUCinf) was mathematically added, assuming only physical decay, as follows:

where Alast is the activity measured in the last time point and k represents decay constant of carbon-11. Subsequently, the cumulative activity was normalized by the injected dose (ID; kBq) yielding time-integrated activity coefficients (TIAC; h). Finally, the resulting TIACs were multiplied by the factor between the subject’s weight (ms; kg) and the phantom weight (mp; 60 kg and 73 kg for females and males, respectively) and were averaged for the male and female models. The TIAC for one organ of an individual subject was calculated as follows:

The TIACs of all mentioned ROIs were entered into OLINDA/EXM 2.1 (Hermes Medical Solution, Stockholm, Sweden) [10] for each sex to obtain organ equivalent dose coefficients (h; Sv/Bq) and contributions to effective dose coefficients (econ; Sv/Bq) with tissue weighting factors (wr) according to ICRP 103 [11]. The relationship between econ and h for each organ can be then defined as:

The TIAC of the total remainder of the body was estimated as the theoretical TIAC for carbon-11 (T1/2/ln(2) = 0.49 h, with T1/2 being the physical half-life of the radionuclide [12]) minus the sum of the regional TIACs.

No gastrointestinal transit or bladder voiding model was used for a conservative estimation of the effective dose (E; Sv). In a final step, the effective dose coefficient (e; Sv/Bq) was calculated as the averaged sum over the organs