Destructive inflammatory reaction after an autologous retinal pigment epithelium and choroid transplantation: no detection of an auto-immune response – Journal of Ophthalmic Inflammation and Infection 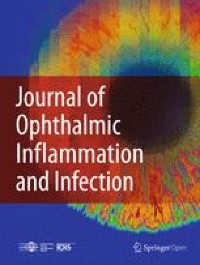 This case-control study was conducted according to the Declaration of Helsinki and the Good Clinical Practice guidelines. The study was approved by the local ethical committee (trial number: NL72704.078.20).

Five patients that developed SRF, HRS, and diffuse RPE atrophy after uncomplicated RPE-choroid transplantation were included at the REH (Rotterdam, the Netherlands), or OSC (Negrar (Verona), Italy). Considering that presence of auto-antibodies has been described previously in AMD patients and even after laser photocoagulation [8, 9] four control groups were included each consisting of five patients: 1) patients that underwent uncomplicated RPE-choroid transplantation, 2) patients that underwent uncomplicated FMT, 3) AMD patients treated with anti-VEGF injections, and 4) healthy age-matched controls. Exclusion criteria were a history of uveitis, diabetic retinopathy, and a systemic autoimmune disease.

Retrospectively, the following data were collected from medical files of the included patients with the inflammatory reaction: demographics, ophthalmic history, general history, indication for surgery, intra- and postoperative complications, and best-corrected visual acuity (BCVA) before surgery, after surgery and at last visit. Spectral Domain – optical coherence tomography (SD-OCT) images, fundus photography, fluoresceine angiography images and fundus autofluorescence (FAF) were collected. From the subjects of the control groups, demographics, ocular history and general history were reported. After informed consent was obtained, peripheral blood was collected providing both serum, and mononuclear cell samples for laboratory tests. The samples were stored at a temperature of − 80 °C until analyses.

In one patient the RPE-choroid graft was explanted because of a recurrent submacular hemorrhage and histopathologic examination was performed. The choroidal explant tissue was fixated in neutral buffered-formalin 10% and after processing, the formalin fixed paraffin embedded block was cut at 4 μm sections which were mounted on slides for histochemical and immunohistochemical staining. Routine staining protocols were used for standard haematoxylin and eosin staining using an automated staining system (HE600, Ventana Medical Systems, Tucsen, AZ, USA). Immunohistochemistry was performed with an automated, validated and accredited staining system (Ventana Benchmark ULTRA, Ventana Medical Systems, Tucsen, AZ, USA) using ultraview universal DAB detection kit. In brief, following deparaffinisation and heat-induced antigen retrieval, the tissue samples were incubated according to their optimized time with the antibody of interest. Incubation was followed by haematoxylin II counter stain for 8 minutes and then a blue coloring reagent for 8 minutes according to the manufacturer’s instructions (Ventana). Tonsil tissue was used as a positive control for all antibodies.

Serum anti-RPE-choroid antibodies and anti-retinal antibodies were determined as described previously, with slight optimization of the protocol [10]. In short, biochip primate retinal slides (Euroimmun, Lübeck, Germany) were incubated with patients’ serum for 30 minutes at room temperature (RT) (dilution 1:100). After incubation, the slides were washed with phosphate-buffered saline (PBS) for 15 minutes and incubated with goat anti-human IgG Cy5 (ab97172; Abcam, Cambridge, UK) for 30 minutes at RT. Tissue slides were washed again with PBS for 15 minutes, embedded in glycerol and covered with a coverslip. Slides were analysed and photographed using an Axioplan2 fluorescence microscope with AxioCam MRm at 160x magnification and an exposure time of 6 seconds (Zeiss, Thornwood, NY, USA). In case of a weak result the procedure was repeated with a serum dilution 1:50 and 1:25. PBS and serum negative for anti-nuclear antibodies (ANA) were used as negative references. Recombinant rabbit anti-RPE65 antibody (ab231782; dilution 1:250; Abcam, Cambridge, UK), recombinant anti-collagen type 1 (ab138492; dilution 1:500; Abcam, Cambridge, UK), and serum of an anti-retinal antibody positive, and ANA-positive subject (dilution 1:100) were used as positive references.

DNA was collected from whole blood using a QIAamp DNA Blood Mini kit, or using PAXgene blood tubes and a PAXgene Blood DNA Kit (Qiagen, Hilden, Germany), following manufacturer protocol. HLA class I and II typing was performed on all samples except for the five healthy participants. The procedure was performed as described by van Sonderen et al. [13] The HLA type of the study subjects was compared to the frequency in 5604 Dutch healthy blood donors [13].

Because of the small number of patients, and the explorative nature of the study, no statistical analysis was performed. The data have been evaluated descriptively.