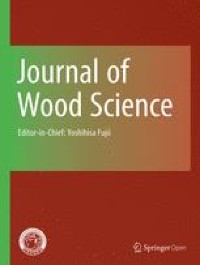 G/S- and S-DHPs were prepared by horseradish peroxidase-catalyzed polymerization of a mixture of coniferyl alcohol and sinapyl alcohol (molar ratio, 1:1), and sinapyl alcohol, respectively, according to the conventional endwise polymerization method, as described previously [15,16,17]. Other reagents were purchased from commercial sources and used without further purification.

For demethylation of G/S-DHP, ICH (0.970 mL) was added to a solution of G/S-DHP (100 mg) in DMF (2.5 mL), while for demethylation of S-DHP, ICH (1.845 mL) was added to a solution of S-DHP (150 mg) in DMF (3.5 mL). The reaction mixtures were then refluxed for designated reaction periods (5, 60, and 720 min). After cooling to ambient temperature, the reaction mixtures were washed with n-hexane three times, and poured into saturated Na2S2O5 solution [15]. The resulting precipitate was collected by filtration with distilled water, and lyophilized to afford the demethylated DHPs, namely, deMeG/S-DHP and deMeS-DHP from G/S-DHP and S-DHP, respectively.

Characterization of demethylated G/S- and S-DHPs

The DHPs before and after demethylation were subjected to a Folin–Ciocalteu assay for determination of the total free phenolic-OH content [15, 18] and a nitroso assay for qualitative analysis of the catechol residues [15, 19].

The DHPs before and after demethylation were subjected to the following tests according to methods reported in the previous paper [15]. ( +)-Catechin was also tested as a control. All tests were performed twice.

The demethylated DHP (or original DHP) (2 mg) was added to a solution of 0.5 mM FeCl3 in 50 mM acetate buffer (pH 5.5, 18 mL). The mixture was sonicated for 3 min in a Branson Ultrasonic Cleaner 3510 J-MT (Branson Ultrasonic CO., Danbury, USA, output: 30 W), stirred at ambient temperature for 18 h, and then centrifuged. The supernatant was treated with 2.5 mM Chrome Azurol S (CAS) aqueous solution (2.6 mL; Nacalai Tesque Inc., Kyoto, Japan), kept at ambient temperature for 10 min, and then subjected to UV–vis measurement at 630 nm. The calibration curve was constructed using a series of FeCl3 solutions in the acetate buffer.

The demethylated DHP (or original DHP) (2 mg) was added to a solution of bovine serum albumin (BSA) in 50 mM acetate buffer (pH 4.5, 8 mL). The mixture was sonicated for 3 min in the ultrasonic cleaner, stirred at ambient temperature for 1 h, and then centrifuged. The supernatant was filtered through cotton wool and treated with Bradford reagent (3 mL). After 10 min, the solution was subjected to UV–vis measurement at 595 nm. The calibration curve was constructed using BSA solutions in the acetate buffer.