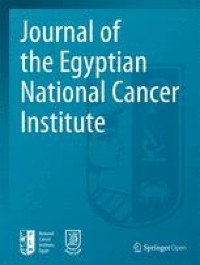 A 79-year-old woman without significant medical or surgical history was referred to our hospital complaining of a slowly growing anterior neck swelling. She stated that this swelling started to appear in her neck 6 months ago. The swelling was painless and gradually increasing in size. She refused to seek medical advice throughout those months till she started to feel some respiratory discomfort.

Clinical examination revealed a stony hard neck swelling that moved up and down with deglutition, mostly of thyroid origin. The swelling was not tender and its lower border could not be felt by palpation, denoting the possibility of retrosternal extension (Fig. 1A).

Neck ultrasonography showed a nodule in the lower pole of the right thyroid lobe. This nodule was hypoechoic with internal vascularity, microcalcification, and cystic degeneration measuring about 3–4 cm. It was categorized as TIRADS 4b [3]. It extended down to the mediastinum with some enlarged cervical lymph nodes with preserved criteria.

Computerized tomography scan with contrast of the neck and chest was done and revealed a soft tissue mass measuring 3.3×4.8 cm inseparable from the right thyroid lobe, contacting strap muscles anteriorly and prevertebral muscles posteriorly, compressing and displacing trachea to the left side, contacting the right carotid sheath with neither encasement nor infiltration. The mass was extending inferiorly to the mediastinum and left brachiocephalic arch and reaching the level of the fifth cervical vertebra (Fig. 2). Few nodules were seen in both lung fields; the largest was measuring 5 mm in the left anterior segment of the left lung for follow-up.

Thyroid function tests were of normal values and her vocal cords were freely mobile bilaterally.

FNAC was taken from the hard thyroid swelling. Smears prepared were moderately cellular showing occasional scattered groups of cells with a moderate degree of atypia and pleomorphism in RBCs background, categorized as Besthesda V [4].

The patient was prepared for surgery after a multidisciplinary discussion. Total thyroidectomy was done, visualizing both recurrent laryngeal nerves and preserving the parathyroid glands. The surgery was adopted via a fully cervical approach “Kocher’s collar incision” without sternotomy. The patient had a smooth postoperative course and was discharged 48 h after surgery.

Sections prepared from the right lobe revealed infiltration by well-circumscribed lobulated malignant tumoral proliferation formed of cartilaginous matrix with chondrocytes embedded in lacunae and showing hypercellularity, occasional binucleate nuclei and scarce mitosis. Foci of myxoid degeneration were also seen. No detected necrosis. Focal bone formation was detected. Sections from the left lobe and isthmus were free. Slides stained for cytokeratin, EMA, P63, TTF1, Pax8, and thyroglobulin were negative in the tumor cells (Fig. 3). Ki-67 was less than 5% which is against high ki-67 proliferation index usually seen in anaplastic thyroid carcinoma. Picture of low-grade chondrosarcoma of right thyroid lobe was the final pathologic diagnosis.

Comprehensive immunohistochemical studies showed that this tumor is not consistent with anaplastic thyroid carcinoma with chondrosarcomatous differentiation as the tumor cells were totally negative for TTF-1, thyroglobulin, and PAX-8 which are the major three markers used in immunohistochemical studies for the determination of thyroid origin. In addition, tumor cells were completely negative for panCK, CK7, CK20, EMA, and P63. Lastly Ki-67 was less than 5% which is against high ki-67 proliferation index usually seen in anaplastic thyroid carcinoma. These findings were all supportive for the diagnosis of low grade chondrosarcoma

The possibility of metastatic chondrosarcoma to the thyroid gland was ruled out by a computerized scan of the whole body’s skeleton that did not detect any primary tumor. MDT discussion agreed for active surveillance of the patient on levothyroxine replacement therapy.

A computerized scan of the chest 18 months postoperative revealed a progressive course of the pulmonary nodules reaching a size of 25mm with moderate right-sided pleural effusion that was proved to be malignant by cytological evaluation. At that time the patient’s performance declined to ECOG 3. That is why the multi-disciplinary tumor board recommended best supportive care and pain therapy measures.