Does the material well-being at schools successfully compensate for socioeconomic disadvantages? Analysis of resilient schools in Sweden – Large-scale Assessments in Education 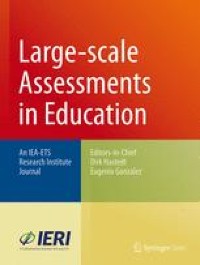 Making use of secondary data from PISA, the study posed the questions as to whether resilient schools could be identified in Sweden throughout PISA cycles from 2000 to 2018 and how the material well-being of these schools compares to that of non-resilient and more advantaged schools.

Second, after identifying resilient schools and other school types, aspects of the groups’ material well-being were compared. Previous research had indicated a relationship between students’ socioeconomic background and their academic achievement (see Sirin, 2005 for a meta-analytic overview), which others refer to as a relationship between the students’ material and cognitive well-being (Borgonovi, 2020). Applying the well-being framework by Borgonovi and Pál (2016), this study shifted the focus towards school-level factors measuring material well-being, namely the schools’ human resources (measured by perceived teacher shortage and proportion of fully certified teachers), material resources at school (measured by a perceived lack of physical educational resources and the availability of computers), and, lastly, the extracurricular activities offered by schools. Results indicated no significant differences between resilient and non-resilient schools. Even more so, no differences between any high- and low-achieving school groups within the same socioeconomic level could be detected. Thus, results suggest that equal or similar inputs in school resources do not result in equal achievement outputs. More research on the underlying factors behind the higher achievement of resilient schools is needed. While individual aspects of material well-being have been shown to explain large parts of the variation in achievement outcomes, this study does not indicate the similar importance of material well-being at the school level.

The group comparison in this study did not show significant differences between resilient and non-resilient schools from similar socioeconomic backgrounds. However, the study highlighted a relatively stable pattern of significant differences in the schools’ perceived shortage of teachers between student bodies of different socioeconomic levels. In 2000, resilient schools reported significantly higher perceived teacher shortages than more advantaged high-achieving schools (Groups 3 and 5). In addition, the group of non-resilient schools with socioeconomically disadvantaged student populations (Group 2) also reported significantly higher perceived shortages than schools with a more advantaged student body (Groups 3, 5 and 6) in 2000, 2012, 2015 and 2018. Similarly, Gustafsson & Hansson (2016) found an unequal distribution of teacher competence between schools, especially in relation to students’ migration backgrounds. In schools with a high proportion of students with a mother tongue other than Swedish, teachers were found to have the lowest competence. This lack of compensatory allocation of teacher competence, referred to as educational segregation, is considered to contribute to low student performance and achievement differences between schools. This study indicates a similar pattern in perceived teacher shortages: schools with socioeconomically more advantaged student bodies reported significantly lower teacher shortages. Yet, no significant differences between successful and less successful schools with disadvantaged student compositions were detected. In other words, there was no indication of a more compensatory distribution of resources at resilient schools, nor was there any indication that resources may explain achievement differences between high- and low-achieving schools with similar socioeconomic compositions.

Yet, certain limitations are associated with the chosen operationalization of resilient schools that weaken the interpretation of results to some extent. The use of strict, predefined cutoff values (i.e., proficiency Level 3) reflects the specific achievement outcome of interest (i.e., the skills needed to succeed in life) and allows for a comparison across cycles. However, the actual performance differences between resilient and non-resilient schools close to the cutoff values may in reality be negligible. Further, the resulting dichotomy of resilient and non-resilient schools has led to a severe reduction of sample size and statistical power. Therefore, inferences regarding the second research question cannot be drawn without caution, and further research with larger group sizes is needed. Differences may also occur on the classroom level, but PISA does not offer data for such analyses.

It is also noteworthy that the measure of ESCS has undergone changes in its measurement models and instruments (Avvisati, 2020). For instance, country-specific items in the household possession scale have been modified, the position of the questions within the questionnaire has changed, and the scaling model and procedures have been adapted over cycles (Avvisati, 2020). Due to societal changes, the meaning of “household possessions” has changed over time; for instance, owning a cellphone and being connected to the internet had a different meaning in 2000 than in 2018. Hence, an adaptation in the computation of the index was needed (OECD, 2019b). Overall, the comparability across countries and PISA cycles can be critiqued (OECD, 2019b; Rutkowski & Rutkowski, 2013). Although ways of improvement have been suggested (e.g., Rutkowski & Rutkowski, 2013, proposed the use of more country-specific items), it has been proposed that the validity and comparability of the components included in the ESCS index are, nonetheless, relatively high (Avvisati, 2020; Skolverket, 2012). That being said, it is important to highlight that this study measures a school’s relative position in the distribution of ESCS at a given time in the Swedish context.

However, low or non-significant school effects in studies using international large-scale assessments are relatively common in Sweden and beyond (Wiberg & Rolfsman, 2013). A review of close to 400 studies revealed no consistent or strong effect of school resources on student performance after family inputs were accounted for (Hanushek, 1997). This is not to say that school resources do not matter but may suggest that some schools are better at using given resources than others.

Previous research on the material well-being at resilient schools is scarce. Yet, caution must be taken when transferring research results from this study into the context of another school system. Even though the Swedish school system shares some similarities with other Nordic countries and somewhat comparable conditions, it has been argued that it differs from its neighboring systems due to its distinct political approach and particularly intensive reforms (Frønes et al., 2020; SOU, 2014:5). Such differences in the educational systems are highlighted in previous research that indicates that school-level factors associated with student achievement somewhat differ across Nordic countries, as well as over the years. For instance, a perceived lack of resources was found to negatively predict student achievement in Norway in 2003 but not in 2012, nor was such a relationship found in Denmark, Finland, Island, and Sweden at either of the two time points (Laukaityte & Rolfsman, 2020). Another study, on the other hand, found the lack of resources in science to negatively predict achievement in Sweden in 2003 but not in 2007, nor in Norway (Wiberg & Rolfsman, 2013). This unstable pattern of relationships between school resources and achievement calls for further research and the question as to why some factors are significant at specific time points and countries, unfortunately, remains unanswered for the time being.

This study adds to research in educational equity, as it highlights the changing landscape of resilient schools in Sweden and paves the way for further analyses. Existing literature has paid very little attention to resilient schools—schools which we believe to be an example of effective and equitable schools, as they “beat the odds” and report high achievement despite a socioeconomically disadvantaged student body that places them at risk for low achievement. Although the underlying reasons as to why resilient schools are more successful in compensating for socioeconomic disadvantages, unfortunately, remain underexplored, we do hope this study has raised interest in the topic and that future research will target this important but neglected group of schools.