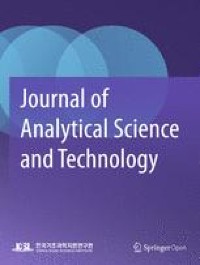 An LC–MS/MS system comprising an Agilent 1260 series HPLC system (Agilent Technologies, Santa Clara, CA, USA) and an API 3200 mass spectrometer (AB SCIEX, Framingham, MA, USA) equipped with a turbo electrospray interface was used in this study. The mass spectrometer was operated in the multiple reaction monitoring (MRM) mode with positive electrospray ionization (ESI+) for the quantification of alpelisib and the IS. The optimized collision energy voltages were 33 and 35 V for alpelisib and the IS, respectively, and the source temperature was set at 550 °C. The most abundant product ions were at m/z 328.0 from the precursor ion at m/z 442.1 for alpelisib, and at m/z 209.1 from the precursor ion at m/z 465.0 for the IS. Chromatographic resolution of alpelisib and the IS was performed using a reversed-phase HPLC column (XTerra MS C18, 50 mm × 2.1 mm, 5 µm; Waters Corporation, Milford, MA, USA) with a linear gradient of 0.1% formic acid in water and 0.1% formic acid acetonitrile (90%:10% → 5%:95%, v/v) at a flow rate of 0.4 mL/min for 5 min. The autosampler temperature was set at 10 °C. Instrument control and data analysis were performed using Analyst software version 1.5.2 (Applied Biosystems, Foster City, CA, USA).

A 20 µL aliquot of mouse or human plasma sample was added to 80 µL of acetonitrile containing 300 ng/mL of the IS to induce the precipitation of plasma proteins. After vortexing for 10 min, the mixture was centrifuged at 13,500×g for 10 min at 4 °C. The supernatant was transferred to a 96-well sample plate, and 10 μL was injected into the LC–MS/MS system.

Standard stock solutions (1000 µg/mL) of alpelisib and the IS were prepared in dimethyl sulfoxide (DMSO). Standard working solutions of alpelisib were prepared by serial dilution of the standard stock solution with methanol. The IS solution was prepared in acetonitrile at a final concentration of 300 ng/mL. Calibration standard samples for alpelisib were prepared by spiking 2 µL of standard working solution into 18 µL of blank mouse or human plasma to produce final concentrations of 1, 2, 10, 50, 200, 400, 800, and 2000 ng/mL. In addition, mouse and human plasma quality control (QC) alpelisib samples of 3 ng/mL (low QC; LQC), 150 ng/mL (middle QC; MQC), and 1600 ng/mL (high QC; HQC) were prepared using the same process as that for the standard samples.

The stability of alpelisib in mouse and human plasma was assessed using three QC samples in triplicate under various storage and handling conditions: bench-top, long-term, freeze–thaw, and autosampler storage. For the assessment of bench-top stability, QC samples containing alpelisib were maintained at room temperature for 6 h prior to sample preparation. The freeze–thaw stability assessment was performed by repeating three cycles of freezing at − 20 °C for at least 12 h followed by thawing at room temperature. To evaluate long-term stability, the samples were stored at − 20 °C for 1 month and then processed as described above. To determine the autosampler stability, QC samples were processed by protein precipitation and allowed to stand at 10 °C for 10 h. Stability was determined by comparing the measured concentrations of samples stored under the conditions mentioned above with nominal concentrations. The stability of stock solutions of alpelisib and the IS was also assessed after storage at − 20 °C for 6 months.

The dilution effect was evaluated for samples with concentrations above the upper limit of quantification (ULOQ). Plasma samples containing tenfold or fivefold concentrations of HQC were prepared from mouse or human plasma, respectively, and then diluted using blank plasma. The mixture was processed according to the method described above, and the analyte concentration was determined. Accuracy was determined by comparing the calculated concentrations to nominal concentrations and was considered acceptable when the deviation was within ± 15%. The acceptance criterion for precision was defined as RSD ≤ 15%.

In vitro and in vivo pharmacokinetic study of alpelisib

Metabolic stability of alpelisib was determined using mouse and human liver microsomes. Alpelisib dissolved in DMSO was diluted to a final concentration of 1 µM in a reaction mixture consisting of 160 µL potassium phosphate buffer, 1 mM β-nicotinamide adenine dinucleotide phosphate, and 0.5 mg/mL human or mouse liver microsomes. This mixture was incubated at 37 °C, and the reaction was terminated at 0, 10, 30, and 60 min by adding ice-cold acetonitrile containing the IS. After centrifugation of the samples, the supernatant was stored at − 20 °C until LC–MS/MS analysis.

The pharmacokinetic properties of alpelisib were investigated in vivo using mice. Animal experiments were performed in accordance with the Guidelines for Animal Experiments of the Korea Research Institute of Bioscience and Biotechnology (approval number: KRIBB-AEC-20309). Male ICR mice (8 weeks old) were obtained from Orient Bio (Seongnam, Gyeonggi, Republic of Korea). They were maintained under a controlled environment (12 h light/dark cycle; temperature, 22 ± 2 °C; relative humidity, 50 ± 5%) with free access to water and food for at least 1 week. Mice were fasted for at least 8 h with free access to water before the experiment. A dosing solution of alpelisib for intravenous (IV) administration was prepared in a solvent composed of saline, PEG400, ethanol, and DMSO (44:50:5:1) at a concentration of 2 mg/mL. A dosing solution of alpelisib for oral administration was prepared in a solvent of 20% 2-hydroxypropyl-beta-cyclodextrin in water, saline, and ethanol (50:45:5) at a concentration of 5 mg/mL. Thereafter, alpelisib was injected into the tail vein (10 mg/kg) or administered orally (50 mg/kg) to mice. Following IV administration of alpelisib, blood was collected from the retro-orbital sinus using heparinized capillaries at 0 (pre-dose), 5, 15, and 30 min, and 1, 2, 4, 6, 8, and 24 h post-dose. In the group assigned to oral administration, blood was obtained at 0 (pre-dose), 15, and 30 min, and 1, 2, 4, 6, 8, and 24 h post-dose. The blood was centrifuged immediately after collection at 13,500 × g for 10 min at 4 °C, and the plasma fractions were stored at − 20 °C until LC–MS/MS analysis.