Association of primary knee osteoarthritis with DVWA SNP in a group of Egyptian population: a case–control study – Egyptian Journal of Medical Human Genetics 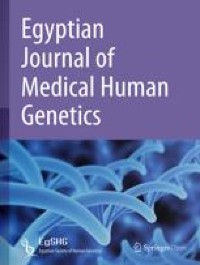 The DVWA gene is located on the human chromosome 3p24.3 and codes for short (276 amino acid) proteins. Within the gene, two areas are related to the Von Willebrand factor type A (VWA) domain. The expressed product of VWA can be found in many proteins and has been proved to have a role in the membrane transport, cellular adhesion, and protein-to-protein interactions [15].

Expression of DVWA is present in diverse human tissues and is highly expressed in cartilage tissue, including OA patients as well as the general population [16]. Development of OA and osteochondrodysplasia has been linked with mutation within the VWA domain of the matrilin-3 gene [17].

In our study, there was no statistically significant difference in the frequencies of AA, AT, and TT genotypes among the patient and control groups (P = 0.502).

Research studies conducted in the relation between DVWA rs11718863 SNP and OA susceptibility revealed controversial conclusions as regards to the association. Our results were in agreement with Meulenbelt et al. (2009) that DVWA rs11718863 SNP did not show any significant effect in OA susceptibility [18]. This result was contradictory to Minafra et al. (2014) and Bravata et al. (2015) where the TT genotype was much significantly higher among the OA patient group [19, 20]. This could be justified due to different genetic distribution between different ethnic populations.

Regarding the clinical knee evaluation, there was no statistically significant difference between AA, AT, and TT genotypes regarding the presence of knee effusion, anserine bursitis, and baker cyst (P = 0.087), (P = 0.416), and (P = 0.665), respectively. These results had been in accordance with our findings that DVWA rs11718863 SNP did not increase OA development or severity, but there were no supporting or contradictory current studies to our results so far.

These results were in agreement with Meulenbelt et al. (2014), while, on the other side, they were contradictory to Minafra et al. (2014) and Bravata et al. (2015) who showed statistically significant association between DVWA rs11718863 SNP and knee OA, both clinically and radiographically [19, 20].

Recently, DVWA has been incorporated to be associated with OA susceptibility. The function of DVWA is through interaction with β-tubulin. Tubulin proteins play an important role in secretion of protein and transportation. They also regulate differentiation of chondrocytes [8, 21].

The bindings’ strength of tubulin seems to be influenced by DVWA SNPs alleles. Different SNPs of DVWA gene have been recently detected and have been still in study regarding the association with OA (rs11718863, rs9864422, and rs7639618, for instance). The association of DVWA with OA can be affected by combined effect of two SNPs together rather than a SNP [8].