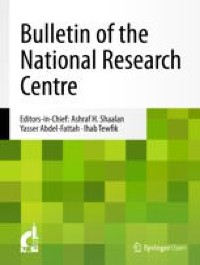 It can be depicted in Fig. 1 that the most of the babool gum samples endure in fair condition as fresh sample during the analysis up to 70% RH, but the sample which was subjected to higher humidity (> 75%) noticed the loss of their original physical state and colour turned into yellowish. Additionally, no incidence of mould growth was observed on gum samples throughout the process of experiment.

At lower temperature and higher relative humidity values, the variation in EMC was comparatively higher than at higher temperatures for the equal relative humidity (Fig. 2a). Further, the sorption isotherms of the gum reveal that on increasing the water activity at a particular temperature the EMC increases. The reason might have been due to hydrophilic nature of carbohydrates present in the babool gum. Also, with the enhancement in temperature at a given water activity, the EMC decreased which is obvious and similar to other numerous foods. The reason for this could be that when there is rise in temperature, water molecules get stimulated because of their energy level and become unsteady and rupture away from water-binding positions of hygroscopic materials compels reduction in the number of active spots for water binding at higher temperature (Phillips and Williams 2000). The figure indicated that the isotherms of babool gum exhibit sigmoid shape. This type of isotherms is common for almost all food materials. Similar results have also been obtained by Ahmad and Islam (2018) for commercial flours (wheat, rice and corn) and Vishwakarma et al. (2011) for guar grain and guar gum splits. This study revealed that the moisture sorption behaviour is important for safe and long storage of the products as well as selection of packaging materials for storing the products under different environmental conditions.

The sorption isotherm model parameters and goodness of fit factors like %RMSE, adjusted coefficient of determination (R2), standard error (SE) and mean absolute percentage error (P) have been used to evaluate the adequacy of model in describing the relationship between water activity (aw) and equilibrium moisture content (Sahu and Patel 2020). It can be observed from Table 3 that the GAB model has been found to have best representation of the sorption data because the values of the average grade statistical errors were found to be better in relation to other four models. The range of %RMSE and %P values of babool gum were found from 3.25 to 8.54% and 0.02 to 0.24%, respectively, for GAB model. High value of adjusted R2 (0.96–0.99) also reveals its high adequacy of fitting the model. Hence, the GAB model gave the best fit for the adsorption isotherm of the test gum. The worst equation obtained for the test gums in BET model which was expected as it is thermodynamically suitable up to 0.50 aw. Similar types of finding have also been obtained by Sahu and Patel (2020) for maize-millet-based soy-fortified extruded product and Ahmad and Islam (2018) for commercial flours (wheat, rice and corn).

The monolayer moisture content (Mo) is an indicator for the quantity of water firmly absorbed to definite sites at the exterior of foods, and this is a value that must be attained in order to satisfy food constancy. A graph of Mo versus absolute temperature is shown in Fig. 2b. It can be seen from Fig. 2b that the monolayer moisture content decreased with the increase in temperature which is obvious to many other food products. Similar result had demonstrated by Sahu et al. (2021) for extruded product. This may due to the fact that the increased temperature causes the drop in the extent of hydrogen bonding in the polymers, thus decreasing the accessibility of energetic portions for water binding and thereby, reduced the monolayer moisture content as narrated by Quirijns et al. (2005).

The relationship between monolayer moisture content (Mo) and absolute temperature (K) has also been obtained by using regression analysis. The linear equation (Eq. 6) for babool gum has been established to relate the relationship.

where Y is monolayer moisture, and % db and x are absolute temperature (K).

The high value of coefficient of determination (R2 = 0.96) indicated that the developed linear relationship between monolayer moisture content and absolute temperature is adequately fitted the experimental data.

In order to establish the isosteric heat of sorption, a plot of natural logarithm of water activity (aw) as a function of the inverse of absolute temperature (1/T) for selected moisture contents was developed (Fig. 3a). From the graph it can be depicted that as the moisture content increases, the slopes of isosters decreased. The slope of the isosters was employed to determine the net isosteric heat of sorption.