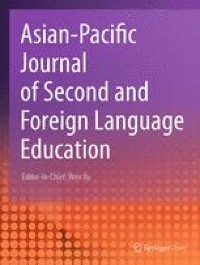 Translanguaging in negotiation of meaning in OCF

Translanguaging in negotiation of meaning arose when the participants managed to figure out the exact linguistic form of English with the scaffold of Chinese when they were literally producing L2 writing.

This transcript shows that when the student is trying to produce a word during writing, his or her mother language repertoire can support him or her in reaching the goal. The tutor used repetition by repeating “生活品质降低”, and she also used explicit correction by indicating incorrect use of words and providing the correct form to the student.

At first, S1 failed to figure out a more proper word to refer to the meaning of life quality. However, with her Chinese language repertoire, she realized that there is a Chinese synonym “生活品质”, and she soon associated the Chinese word with the spelling of its corresponding English word “quality”.

The need for beautifying compositions prompted translanguaging and motivated the student to reach her purpose efficiently. From this excerpt, we can see that the students use their first language to associate with the second language to figure out a target word and cope with difficulties in spelling with the help of her comprehension in the original Chinese word when the need for beautification is stimulated. Sometimes the lack of vocabulary or unfamiliarity with certain words will cause barriers in written production, which affects the fluency and accuracy of students’ writing, but students will turn to translanguaging, which enables them to make a bridge to target words with the aid of the Chinese language repertoire and finally increase the lexical variation or lexical complexity of their compositions.

The use of bilingual resources maximized her chances of communicating through her written texts. She chose from her linguistic repertoires to solve problems in constructing English and Chinese texts. This corroborates Hornberger’s (2005, p. 607) assertions that “bi/multilinguals’ learning is maximized when they are allowed and enabled to draw from across all their existing language skills rather than being constrained and inhibited from doing so by monolingual instructional assumptions and practices”. This choice of languages also indexes a disruption of language hierarchies and monolingual habitus ideologies in multilingual settings.

From the comparison of S1’s draft and revision, we can see that the translanguaging in tutor’s feedback has a positive effect on students’ argumentative writing. It helps S1 use Chinese to recall English words and improve their clarity in meaning-making.

Textual cohesion refers to the linguistic features that relate sentences to one another. According to the data, participants have used translanguaging in OCF for improving textual cohesion, which was specifically displayed in the modifications of logical connectors.

Excerpt 2 suggests a mismatch between connective devices in Chinese and English and explains in part why Chinese students have challenges making connections between ideas. The tutor used explicit correction in this excerpt. Tutor and S2, by extracting language resources from linguistic repertoires, which refers here to the usage of logical connectors in the Chinese language, applied this kind of language sense to the OCF.

Expressions of logical connection are often not expressed in words but derived from contextual inferences. The finding above concurs with earlier findings in Uysal’s (2008) study that non-mother tongue students tend to create obscure, unclear sentence logic. In this circumstance, ways of meaning-making are language specific.

According to the excerpt and the draft & revision above, we can see that translanguaging in OCF gives assistance to group members’ logical expression, and the use of Chinese helps to move the discussion forward.

Textual coherence refers to the relations of meaning between individual units of a text, which allows a text to be logical and semantically consistent. It arises from the relationship between the underlying ideas of a text, together with the logical organization and development of the text, and is achieved with adequate structuring and organization of the content. The students were inclined to improve their textual coherence in the post-writing process.

In Excerpt 3, the tutor used metalinguistic clues; without providing the correct form, the teacher provided comments and information related to the formation of the student’s writing. Excerpt 3 shows that translanguaging was also used in OCF to improve textual coherence. The improvement of textual coherence was based on the understanding of the whole text and on the sense of language. S3 chose to translate a sentence that might be problematic into Chinese to deepen the understanding of the sentences and to determine the problem. Apparently, the role of the mother tongue is irreplaceable because the sense of the mother tongue usually overwhelms the sense of the second language. In these cases, the students, through linguistic repertoire, further the understanding of the sentence and construct the whole meaning again.

According to the results, translanguaging in OCF plays a main role in improving the cohesion and coherence of L2 writing. To revise the essay, students tended to review their writing text utilizing Chinese, or more specifically, linguistic repertoires from the Chinese language. When they produced a sentence, they did not realize the problem. However, after a second reading and thinking about the improvement by using Chinese, they soon determined the problem and solved it. The results confirm the argument that both languages are used in a dynamic and functionally integrated manner to organize and mediate mental processes in understanding, speaking, literacy, and, not least, learning (Lewis et al., 2012).

From graft & revision 3, it can be seen that translanguaging in OCF helps students clarify meta-linguistic discourse and clarify the point of discussion by using Chinese.

Translanguaging in negotiation of form in OCF

The student, by using his or her linguistic knowledge and language sensibility, makes a link between the original English grammatical form and Chinese grammar.

The grammatical error was made because of a direct transfer from Chinese expression. Apparently, S4 used her knowledge from the linguistic repertoire to provide resources to be written in writing.

As her mother tongue, Chinese exerted significant influence during the process of her writing. The understanding of the Chinese expression of S4 affected her knowledge of the corresponding expression in English. However, she was unconscious of the error for not aware of the distinctions between the two languages. Indeed, a translingual process happened in her mind that S4 extracted resources from linguistic repertoire but only in Chinese repertoire, then according to her own understanding, finally constructed the sentence. However, most L2 writers perform mental translation when they write in a new language: they think in L1 and translate their thoughts into L2. It is easier to work on translation errors or revise a content-rich paper than to help someone believe. Translanguaging in OCF here can be beneficial to enhancing students’ understanding and learning of grammar, encouraging learner participation.

Excerpt 5 is also a conversation between the tutor and S4, and the tutor used the strategy of metalinguistic clues here by asking S4, “Do you think we can use that in English writing?”, which helped S4 develop her background knowledge in her academic learning. Translanguaging in OCF helps S4 know how to use the appropriate comma in English essay writing. Students first have to become familiar with academic writing styles in their first language: read and write enough to develop their academic writing ability, or it doubles cognitive demands when they have to learn to write in an unfamiliar writing style in a newly developing way language. They should become familiar with academic writing styles in their first language through reading and writing academic work in L1.

The draft & revision above is S4’s writing before and after the OCF (Excerpts 4 and 5). It shows that translanguaging in OCF gives students better understanding of grammatical or syntactical rules and makes learners pay more attention to spelling and format in L2 writing.

By Yibei Wang and Danli Li