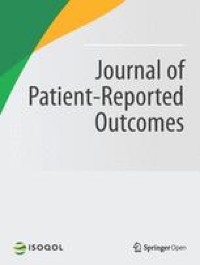 This study uses a single-center cross-sectional study design. The design followed the international recommendations for strengthening the Reporting of Observational Studies in Epidemiology [21]. The study protocol was submitted and approved by the local ethical review committee (Approval No.:  2020-0380). The authors obtained written informed consent from patients who were hospitalized between April and September 2021. Furthermore, all data used in this study, including HRQOL and FIM, had been measured as part of routine care for patients with brain tumors since April 2016 at the institution. Therefore, patients undergoing rehabilitation from April 2016 to March 2019 we offered the opportunity to opt-out to use data.

The participants comprised patients aged ≥ 20 years who were admitted to a single tertiary care university hospital for the treatment of brain tumors between April 2016 and September 2021. The patients were also undergoing physical and occupational therapy, or physical and occupational therapy with speech therapy. The exclusion criteria were based on previous studies [19, 22] and included: those who scored < 23 on the Mini Mental State Examination, those who had difficulty answering the HRQOL questions due to aphasia or severe higher brain dysfunction, and those who had difficulty answering the questions due to poor general health.

Assessment of general health and HRQOL

The FIM was used to assess ADL, and the Karnofsky performance status (KPS) was used to assess general health. HRQOL was assessed using the QLQ-C30, BN20, and EQ-5D-5L. All parameters were assessed at the time of discharge. FIM and KPS were assessed by the therapist in charge, whereas in principle, patients were required to answer the HRQOL questions by themselves. The therapist in charge of the patient was allowed to assist the patient in answering the questions if the patient had certain limitations that impaired them from filling out the form. These limitations included reading impairment due to motor paralysis or visual field impairment caused by central nervous system disorders. Age, sex, brain tumor type, tumor location (right, left, other), surgery, radiotherapy, chemotherapy, first occurrence or recurrence, and destination were extracted from the medical records. Brain tumors were classified based on the results of pathological examination according to the WHO 2016 Pathological Classification of Brain Tumors [23]. Finally, based on previous studies [15, 22], the patients were classified into five groups: glioblastoma, grade III brain tumors (WHO grade III), primary central nervous system lymphomas (PCNSLs), MBTs, and grade I brain tumors (WHO grade I). The criteria used to determine whether surgery was performed were based on a previous study [24] and excluded biopsy from being considered a surgery. In patients with recurrent disease, history of previous surgery, radiotherapy, or chemotherapy was not included.

The FIM is an assessment of ADL, consisting of a motor category for self-care tasks (eating, grooming, bathing, dressing, toileting), sphincter control tasks (bladder management, bowel management), transfer tasks (bed-to-chair transfer, toilet transfer, tub or shower transfer), and locomotion tasks (walk or wheelchair, stairs), and a cognitive category for communication tasks (comprehension, expression) and social cognition tasks (social interaction, problem solving, memory). Each task is scored on a scale of 1–7 according to the level of independence, with 1 representing complete assistance and 7 representing complete independence. The total score ranges from 18 to 126, with a higher score indicating a greater degree of independence.

The EQ-5D-5L is a generic preference-based measure of HRQOL developed by the EuroQol Group. EQ-5D-5L consists of five dimensions related to mobility, self-care, common activities, pain/discomfort, and anxiety/depression. Patients answer each item on a scale of 1–5 (no problems, slight problems, moderate problems, severe problems, and extreme problems). Initially developed by the EuroQol Group in 1987, the EuroQol-5Dimension-3Level (EQ-5D-3L) index was a five-item, three-level instrument. However, its sensitivity was insufficient, and a ceiling effect was identified. As a result, the five-level EQ-5D-5L was released to overcome these shortcomings [25]. In Japan, the EQ-5D-5L conversion table was completed in 2015, and the EQ-5D-5L index score reflecting Japanese values can be calculated [6]. The EQ-5D-5L utility index ranges from − 0.025 to 1.00 (full health status).

A one-way analysis of variance (ANOVA) with Tukey post hoc analysis was performed to compare FIM total score, KPS, and HRQOL among the glioblastoma, WHO grade III, PCNSL, MBT, and WHO grade I groups. An unpaired t-test was used to compare the total FIM scores, KPS, and HRQOL between the two groups of first or recurrent disease. Additionally, effect size (ES) was calculated using Cohen’s d statistic. Cohen’s d [26] was used to estimate magnitude of standardized differences in means between groups; values were interpreted according to Cohen’s published guidelines (d = 0.2, small effect; d = 0.5, medium effect; d = 0.8, large effect). Pearson’s correlation analysis was used to investigate the relationship between the EQ-5D-5L index score, FIM, and disease-specific HQOL scale. In accordance with Guilford’s Rule of Thumb [27], the criterion for the strength of correlation was set as follows: |r|= 0–0.2 as “almost no correlation”, 0.2–0.4 as “weak correlation”, 0.4–0.7 as “moderately correlated”, and 0.7–1.0 as “strongly correlated”. Finally, a multiple regression analysis was performed to investigate the factors affecting the EQ-5D-5L index score at the time of hospital discharge, with the EQ-5D-5L index score as the dependent variable and age, sex, brain tumor type, and newly diagnosed or recurrent disease as independent variables. In this study, the forced imputation method of analysis was used to visually compare all independent variables with one other. The independent variables were selected with reference to previous studies that used the HRQOL scale and FIM total score as independent variables [15, 28]. Categorical data were transformed into dummy variables, and WHO grade I was used as the reference category for brain tumor type. A p-value of < 0.05 was regarded as being statistically significant, and all reported p-values were two-tailed. All statistical procedures were conducted using SPSS for Windows version 24.