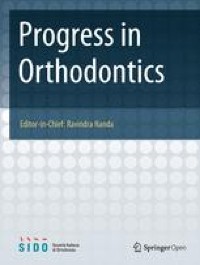 Some studies have already shown that orthodontics has been affected by the pandemic, especially regarding infection control measures and encouragement of virtual patient care [5, 17, 18]. In addition, the pandemic may have caused a reduction in the average number of new patients seeking orthodontic treatment in 2020 [19].

To fully understand the consequences of the new coronavirus in our specialty, the search for new knowledge not yet explored in this area is still necessary [20]. To date, only two studies have evaluated the impact of the pandemic on the duration of orthodontic treatment [12, 13], with divergent results. The first [12] found that despite the greater number of cancellations of patient appointments during the pandemic, this did not affect total treatment time, and this result is in line with what was found in this study. The second [13] found an increase of about four months in treatment time. None of these studies controlled confounding variables that might impact treatment time.

A previous study [7] showed that females were more anxious about the impact of the coronavirus on their orthodontic treatment than males, which may demonstrate that female individuals would be more zealous with their treatment. This could explain the shorter treatment time associated with females in the present study. This fact agrees with a previous study [21], but differs from others already published in which sex did not seem to be an important factor for treatment time [9,10,11].

The number of absences/missed appointments that occurred during the pandemic period was higher than that observed in the pre-pandemic period, which was already an expected fact. Therefore, even though the pandemic caused a greater number of patient absences/missed appointments, this did not seem to be enough to directly affect the total treatment time in a significant way. Through multiple linear regression, it was observed that even for the patients who received treatment for a greater number of months within the pandemic period, there was no impact on their total treatment time. This can demonstrate that although patients were more absent during this period due to restrictions and/or fear, they may have become more collaborative during their treatment. This is despite that they stayed at home for a long time or were using masks, facilitating their collaboration with the use of intermaxillary elastics, for example. This fact may have made their treatment times similar to those treated before the pandemic.

The use of remote monitoring for orthodontic treatment during the pandemic period has been discussed in the current literature [22,23,24]. This practice can make these patients feel more welcomed and, therefore, collaborative with their treatment. A systematic review carried out on this topic [14] found a study [24] that observed greater precision in tooth movement performed with orthodontic aligners when patients were monitored remotely. This same review noted that there are no controlled clinical trials using this tool in orthodontic treatment with fixed appliances, and further studies are needed on this topic. One of the orthodontists who contributed to the sample of this study (operator 1) used this device in some cases treated during the pandemic. This may also be a contributing factor to a non-significant increase in the treatment time of patients treated during this period. In addition, the experience and different habits of the two operators in their orthodontic routine, such as scheduling a smaller number of patients per day during the pandemic, may have contributed to more careful appointments and good management of the cases.

Several previous studies have shown that factors related to patient cooperation can directly impact their treatment time, including the number of absences [9,10,11, 21]. Knowing the great impact that this variable can have on treatment time, patients with more than 13 monthly absences/missed appointments were excluded from the sample to avoid possible outliers.

One study [21] demonstrated that debonds/breakages of orthodontic accessories caused by the patient seem to have less statistical significance in relation to the increase in treatment time than bracket repositioning performed as a decision of the orthodontist. The present study did not show significance in this association, probably because the median number of debonds/breakages of orthodontic accessories committed by these patients was minor. Previous data [25] demonstrated that orthodontic appliances may have failed more frequently during lockdown than normal times, demonstrating the greater variability of this variable according to the sample studied. It is also known that some orthodontists opt for passive reattachment of brackets after their debonding, thus avoiding the return to more flexible arches and possible delays in treatment. In addition, debonds/breakages of brackets or bands too close to patient appointment dates may not have a significant effect on treatment time.

Patients transferred from other professionals were excluded from the present sample. It has already been shown that this can be an important factor for increasing treatment time and poorer quality of finished cases [26]. This includes cases with impacted teeth, such as canines, which often need to be put in traction [27]. The impact of the operator on treatment time was clear in this study because of the greater statistical significance that the regression correction by this variable caused. It is imminent that different operators may cause different treatment times, even with similar clinical experiences, whether by different forms of planning or criteria for the finalization of cases.

The patients’ ages in the sample ranged from 10 to 59 years. A systematic review with a meta-analysis [28] showed that there is no difference in treatment time between adults and adolescents. This corroborates the findings of this study, which showed no effect of age on the variability of orthodontic treatment time. Histological differences between the adult and adolescent periodontium have been previously reported [29]. However, adults patients tend collaborate more with their consultations and adhere to the instructions of their orthodontist, counterbalancing biological factors that may interfere with the course of treatment.

In general, the present sample had few patients with missing teeth, despite this being a common clinical presentation, especially related to molar loss [30]. It has already been shown that patients with loss of permanent molars associated with space closure may have longer treatment times compared to patients without tooth loss [31]. In this study, this variable had no impact on treatment time. This can be explained not only by the low number of patients without missing teeth, but also by the choice of the orthodontist in most of the cases to keep the spaces for later prosthetic rehabilitation. The initial malocclusion was also not statistically significant in this study, corroborating other findings [9, 10, 31,32,33,34]. However, some studies have identified an influence of initial malocclusion on the treatment time variability [35,36,37], demonstrating that its prediction remains an inexact science and depends on numerous factors.

Previous studies [9, 31, 37] found no association in the quality of finished treatment with an increase or reduction of treatment time, while another two [38, 39] found a longer treatment time in cases with reduced clinical results. This can be justified by an “exhaustion of the patient” and consequent less collaboration or poor planning of the case. Cases considered poorly finished were excluded from this study to reduce the variability of the final PAR index and contributed to a greater homogeneity of the sample. These cases presented an index > 5, knowing that this value was according to the error margin found using the Bland–Altman method. The patients’ PAR index was calculated from the scans of the plaster models, and this method is considered valid and reliable [40]. Among seven excluded cases, five were mostly treated during the pandemic, thus indicating that a small portion of these patients may have anticipated their treatment completion.