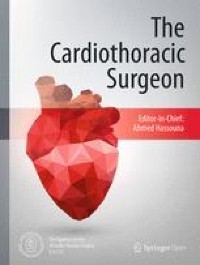 This randomized controlled single-blind study was carried out on 150 patients undergoing elective CABG with sinus rhythm from 1 December 2019 to 28 February 2022 in Cardiothoracic Surgery Department, a tertiary referral hospital established to manage heart diseases. The ethical committee of the Faculty of Medicine, Tanta University Hospital, Tanta, Egypt, has approved the study (approval code 33462/11/19). Then, registration was done on Pan African Clinical Trials Register (PACTR202101651961317). Before enrollment, informed written consent was taken from patients.

Patients were allocated into two equal groups (group ratio 1:1): the placebo group received placebo tablets matching amiodarone tablets, and the amiodarone group received prophylactic oral amiodarone of 5 mg/kg/day, divided into two doses per day for 6 days before and 6 days after surgery. A single type of beta-blocker at a fixed dose was used to standardize the therapy to avoid outcome differences.

Randomization into two groups was performed by computer-generated random numbers and inserted into opaque concealed envelopes. Only participants were blinded.

To ensure consistency, all individuals were administered the same anesthesia. All operations were conducted using hypothermic cardiopulmonary bypass (cooling to 32 °C) with a single dose of cardioplegia solution (cold custodiol; Bretschneider’s HTK Solution. Germany), a magnesium-free prime, and a membrane oxygenator [14].

Central venous pressure, invasive blood pressure, pulse oximetry, continuous electrocardiogram, and monitoring of central and peripheral temperature were performed intraoperatively. All operations were conducted in a single aortic clamping session. During and after surgery, repeated arterial blood samples were collected to measure blood gasses and potassium levels, which remained within normal ranges. Transit time flow measurement (TTFM) using a TTFM device was recorded 5 min after weaning from cardiopulmonary bypass to check the patency of grafts.

Continuous postoperative ECG monitoring was done for 6 days in the ICU and the ward by Mindray Datascope monitors. The rhythm was identified as AF when persistent P waves did not precede every QRS complex, and the ventricular rate was abnormal. If a patient developed POAF and persisted for 5 min or more, the patient was considered POAF.

The primary outcome was the incidence of POAF, while the secondary outcomes were the safety and length of hospital and ICU stay. The adverse effects of amiodarone, including bradycardia and hypotension, were recorded.

G. power 3.1.9.2 (Universitat Kiel, Germany) was utilized for the sample size calculation. The following criteria determined the sample size: A previous study found that the incidence of AF was 25% with amiodarone and 53% with placebo [16], 0.05 α error and 90% power of the study to allocation ratio 1:1. Thirteen cases were added to each group to compensate for dropouts. Consequently, 75 patients were assigned to each group.

Data was entered into the computer and analyzed with SPSS v26 (IBM Inc., Chicago, IL, USA). Quantitative data were expressed as mean and standard deviation (SD) and were compared by an unpaired Student’s test. Qualitative data were given as frequency and percentage (percent) and examined utilizing the chi-square test. Kaplan-Meier curve was used to show the onset of AF. Cox regression was used to estimate the hazard ratio. A two-tailed P value of 0.05 or less was regarded as statistically significant.