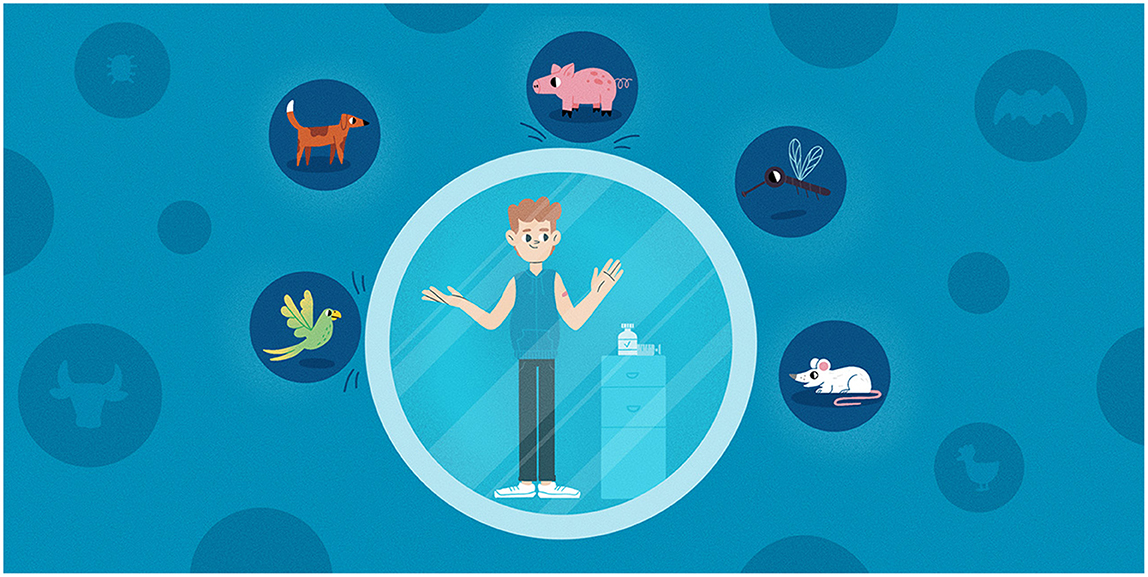 Diseases that are naturally transmitted from animals to humans are called zoonoses or zoonotic diseases. More than 70% of all human infectious diseases came from animals, including Ebola, human immunodeficiency virus (HIV/AIDS), avian influenza and Monkeypox. The COVID-19 pandemic is also a novel zoonosis, caused by a coronavirus that probably came from bats. Zoonoses can happen any time humans come into contact with animals or animal products. Children, people with weakened immune systems or chronic health conditions, and pregnant women are at higher risk of contracting zoonoses. Zoonoses are widespread—not only in forests and wild environments but also in urban areas. This article includes background information on zoonoses and how they move into humans. It also provides helpful tips to avoid infection with these diseases. Finally, it discusses the importance of preventing disease in animals, so that animal diseases are not transmitted to humans.

Humans Have Important Relationships With Animals

Throughout history, domestic animals have helped humans in their daily activities. Breeding of farm animals has provided milk, meat, and eggs so that humans do not go hungry. Horses and donkeys allowed humans to move over long distances and to conquer new territories. Other species, such as cattle, have helped people to plow the fields and cultivate vegetables more easily, while sheep have provided wool to make warm clothes to protect people from cold winters. For thousands of years, cats and dogs living in our homes have developed special bonds with people, protecting us from possible dangers and keeping us company. However, frequent interactions with animals in shared environments can sometimes lead to the spread of diseases from animals to humans.

What Is a Zoonosis?

Diseases that are naturally transmitted from animals to humans are known as zoonoses or zoonotic diseases. Most of the infectious diseases that affect humans originally came from animals and many of them, like Ebola, human immunodeficiency virus (HIV/AIDS), avian influenza and Monkeypox, have become global emergencies [1]. The COVID-19 pandemic is a novel zoonosis caused by a coronavirus that probably came from bats. Important pandemics of the past, like plague and influenza, were also zoonoses.

Some people have a higher risk of acquiring zoonotic diseases, including children, people with weakened immune systems or chronic health conditions, older people, and pregnant women. Pandemics caused by zoonoses can often be attributed to the irresponsible actions of humans, including the creation of enormous animal farms, the overuse of antibiotics on those farms and in pets, the destruction of forests, the illegal animal trade, eating the meat of wild animals, and the movement of people, animals, and animal products across the world. Poor health services also contribute to the spread of zoonotic diseases [2, 3].

Zoonotic diseases can be caused by bacteria, viruses, fungi, and parasites, and the symptoms of zoonoses are therefore quite variable. Many zoonoses can cause flu-like symptoms including fever, headache, fatigue, poor appetite, stomach pain, vomiting, or diarrhea. Many of these symptoms are common across various diseases, so it is important to seek immediate medical attention if they occur.

How do Zoonoses Spread From Animals to People?

Animals, especially domestic ones, are often in contact with humans, and there may be various methods by which transmission (spread) of zoonotic pathogens can occur (Figure 1). Direct contact with the saliva, urine, feces, blood, or mucus of animals, including animal bites and scratches, can result in zoonoses. Many people also get sick from eating food or drinking water/milk contaminated with pathogens from infected animals. Infections can occur from breathing air containing pathogens in aerosol form, or from contact with contaminated areas or surfaces where animals live. Finally, other organisms called vectors—such as mosquitoes, fleas, or ticks—can transmit pathogens from animals to humans [3].

Zoonoses are widespread—not only in forests and wild environments, but also in urban areas. So, it is important that people everywhere are aware of the precautions they should take to avoid contracting a zoonosis.

How Can we Avoid Zoonoses?

The main thing that can be done to reduce the spread of zoonoses is to prevent animals from being infected. If animals are not infected, they will not be able to transmit the disease to other animals or to humans. For example, the best strategy to prevent rabies infections in humans is to vaccinate animals, not humans (Figure 2)!

Unfortunately, it is not always possible to prevent animals from becoming infected, so we must take other steps to avoid infections with zoonotic pathogens (Figure 3). Most importantly, we should wash our hands with soap after being in contact with animals or, if this is not possible, at least disinfect our hands with hand sanitizer. It is also very important to understand animal behavior, to avoid being bitten or scratched. Always avoid touching or picking up wild animals, as they are not used to human contact and they might bite or scratch to protect themselves. In addition, take care not to eat or drink contaminated food or water. Food obtained from animals (meat, eggs) should be cooked well enough to kill pathogens. Finally, prevent bites from mosquitos or other insects by using mosquito repellents and mosquito nets, if available. Here is a little-known fact: the animals that kill the most people every year are not lions or sharks, but mosquitoes! Mosquitoes can transmit serious—even deadly—zoonotic diseases.

Despite the need for all these precautions, we can not let zoonoses cause us to move away from animals and nature—on the contrary, zoonoses give us one more reason to develop a stronger bond with nature and animals, because healthy animals mean healthy people.

A Rabid Dog and the First Human Rabies Vaccine

As we mentioned, zoonotic infections do not just happen in the wildest places on our planet, such as tropical jungles or rainforests. Many zoonotic diseases can also be caught in cities, as a frightened nine-year-old French boy learned in 1831…

Louis Pasteur was one of the greatest microbe scientists in medical history. Among the many diseases affecting people during his lifetime, why did Pasteur focus on rabies? In October 1831, when he was just 9 years old, Pasteur passed by a blacksmith’s shop in Arbois, a village in eastern France, and witnessed a shocking scene. Farmer Nicole had been bitten by a rabid dog, and the blacksmith was trying to treat him by putting a hot iron on the wound. The poor farmer was screaming in pain and Pasteur ran away from the scene in horror. Dogs sick with rabies were often heard howling during the night as they ran through the streets of the village, and little Louis trembled with fear in his bed. Unfortunately, farmer Nicole died—as did eight other unfortunate people from the small village. The dog also died of rabies. Pasteur never forgot this frightening incident and, after many years of study and experiments with rabbits and dogs, he administered the first rabies vaccine to Joseph Meister on July 6, 1885. Meister was a 9-year-old boy who had been bitten by a dog at 8:00 A.M. on July 4. The boy had at least 14 bites and his death from rabies seemed certain. But Pasteur’s vaccine saved him and thus changed the history of medicine [4]. Young Pasteur’s dream of preventing this terrible disease had come true. For this reason, World Zoonoses Day is celebrated every year on July 6, to commemorate the important scientific advancement represented by the first vaccination of a human against rabies.

Zoonoses Prevention Is Better Than Cure

Zoonotic diseases occur more frequently and are spreading all over the World. It does not serve the purpose to treat the symptoms of a patient without eliminating the causes of the illness at the same time, because we will then be treating the illness superficially and not addressing the root cause of the problem. In the same way, it is quite useless to develop more powerful medicines or sophisticated vaccines unless we reduce also the negative impact caused by our species on the other living beings. This can be done by stopping tropical deforestation and international wildlife trafficking, by reducing the use of medicines in animals’ farms and by improving scientific research in wild and domestic animals’ diseases. Trying to control zoonotic diseases after they have already spread to humans is very expensive. Preventing them before they eventually spread from animals to humans is much cheaper than cure and more effective.

Zoonosis/Zoonotic Disease: ↑ A disease that is naturally transmitted from animals to humans.

Pandemic: ↑ The worldwide spread of a disease.

Domestic Animal: ↑ An animal that is not wild and is kept as a pet or to produce food.

Aerosol: ↑ A suspension of tiny particles or droplets in the air that might contain pathogens.

Vector: ↑ Any living agent that carries and transmits an infectious pathogen to another living organism.

Rabies: ↑ It is a deadly disease spread to people from the saliva of infected animals, usually transmitted through a bite.